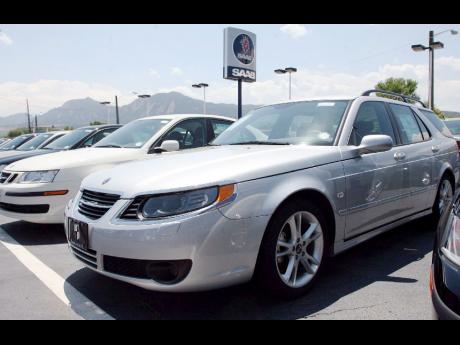 A Saab 9.3 station wagon sits in a line of 9.3s on the lot at a dealership in Boulder, Colorado. - AP

Spyker Cars NV, the owner of Saab Automobile AB, said Friday it is producing Saab cars at the rate of 1,000 per week since resuming production in March.

Spyker, the Dutch niche luxury carmaker which in its 11-year history has never made a profit, confounded critics by buying the much-larger Saab from General Motors in January for US$74 million (€52 million) less cash than Saab had on its books.

In a first-quarter 2010 market update published Friday, Spyker did not offer any new financial information.

Spyker said it intends to begin selling its new 9-5 mid-luxury model in May.

Despite the uncertainty over Saab's future under GM, "The majority of the retail network, close to 1,000 dealers, is intact," the company said.

"Saab has its own sales subsidiaries in the USA and Sweden and will set up its own infrastructure through direct distribution in markets where GM today has the distribution responsibility of Saab cars."

Spyker said after the Saab acquisition it had 3,745 employees at the end of March, up from fewer than 50 before.

The company noted that Chief Executive Victor Muller had been awarded 120,000 Spyker shares "as a reward for the successful acquisition of Saab".

Muller owns around 30 per cent of the company's stock.

Spyker shares closed Thursday at €3.226 in Amsterdam, over twice their value in October 2009 before Spyker began pursuing Saab.