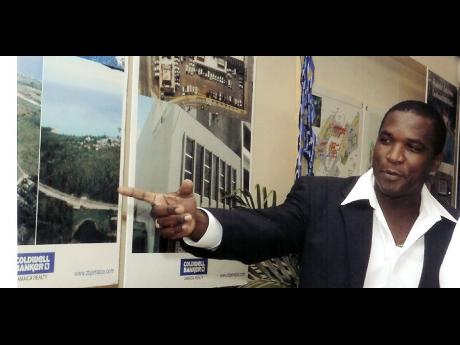 In this 2006 Gleaner photo, Lenworth Tracey points to exhibitions at an expo hosted by FirstCaribbean Building Society, which he headed at the time. - File

In 15 years, the Tax Incentive Programme (TIP) has benefited only 35 companies which, together, qualified for tax breaks amounting to $2.5 billion.  Within that time, 65 companies applied to the programme, well below what its administrators, the Urban Development Corporation (UDC), had expected.

The agency admits that the initiative, designed to encourage reconstruction and economic development in several city centres, has not met its objectives.

But now a revival effort is on, led by former business journalist and banker, Lenworth Tracey, who was recently installed as the corporation's deputy general manager for economic develop-ment and corporate relations.

Tracey's new tack, however, does not appear to involve a fundamental overhaul, but rather, a public-relations fix for the programme.

"We have done a review of it. For the most part, from what we have seen so far, there is incomplete understanding of what the benefits are," Tracey told Sunday Business.

The UDC executive hopes to plug the communication gap to kick-start the financial incentive programme.

"More importantly, explaining the financial impact it will have on businesses in terms of lowering their costs is when you find interest being built," he said, identifying incompleteness of information as a drawback to the success of the programme in the past.

Tracey, on the job for the last four months, disclosed that since the scheme was established in 1995, only 65 applications had been submitted and 35 approved.

This approval rate, he said, represents just under $2.5 billion in tax breaks being offered to companies and individuals under the TIP.

"To date, we have had good interest expressed in it. We have had a couple of applications over the period of time, but my take on it is that we have not had the kind of success that we would like to see given the nature of the benefits that are evident under the programme," the UDC staffer said.

The TIP was established under the Urban Renewal (Tax Relief) Act to provide incentives to those who invest in the development, rehabilitation or refurbishing of land or buildings in locations declared by the law a "special development area".

At its 1995 launch, the programme covered only downtown Kingston, but was extended to Port Royal a year later and Montego Bay in 2000.

In 2009, Spanish Town became a designated area for benefits under the programme.

But while the UDC's Tracey has attributed the relatively limited success of the programme to a lack of public awareness, one downtown business operator has pointed to more than public-relations shortcomings.

Michael Ammar, operator of Ammar's department store, said while there was a general lack of information about the programme, the process of applying for benefits under the scheme was too much of a hassle.

Ammar said he bypassed the programme in expanding his business over the period because of the bureaucratic red tape involved.

"I decided it was not worth it. The paperwork that you had to fill out, the reports, the feasibility of the project that you were doing, (which) you had to provide," he said, proved too much.

"(With) most of the projects that are happening downtown, people don't really know about the programme," he said, pointing out that the business community in the designated downtown area comprised mainly Chinese immigrants, many of whom, he added, did not speak English.

Tracey said the UDC had already started to ramp up public education about the programme.

"Over the last three weeks, we have taken a new look at the Tax Incentive Act, we have looked at all the benefits of the programme, and we have been going public with it again," he said in an interview done in early April.

He said the renewed communi-cation thrust had elicited some positive responses.

Three types of incentives are available under the programme: an investment tax credit, an urban renewal bond (URB) facility, and tax relief on rental income.

Approved developers can get a tax credit of 25 per cent on capital sums invested, which is set off against other income-tax liability.

Tracey explained that under the URB, loan instruments might be issued or underwritten by approved private and public-sector organi-sations to mobilise funds for specific projects.

The URB, he noted, offered benefits to the issuers, investors and users of funds from the bond.

The financial institution underwriting the bond receives a tax break on interests on the loan during the incentive period while the investor earns tax-free interest on the bonds.

According to the UDC, users of funds from the bond, that is, approved developers who undertake projects financed from the URB proceeds, get an investment tax credit on the funds issued for the development and tax-free rental income from the developed property within the incentive period.

The URB is also exempt from transfer tax and Stamp Duty.

Tracey said so far, only one company, GraceKennedy, had accessed the URB facility. It was under this programme that the company recently clinched a $1.875 billion loan from Scotiabank Jamaica at a fixed interest rate of 13.5 per cent for seven years.

GraceKennedy got the loan, finalised in late 2009, to construct its 235,000 square foot warehousing and distribution hub on lands at Bernard Lodge, on the outskirts of Spanish Town.

But it was not the only time that GraceKennedy was making use of the government facility.

Don Wehby, group chief opera-ting officer at GraceKennedy, told Sunday Business that the company had also accessed the programme some 10 years ago.

"We were one of the first companies that utilised it for our Harbour Street branch," he said. "It has been a tremendous benefit and we found it very attractive."

Another beneficiary under the programme was NEM Insurance Company. The company recently undertook extensive refurbishing of its King Street headquarters, which it has occupied for 70 years.

While declining to say how much money had been invested in the upgrade, general manager of NEM, Chris Hind, gave kudos to the government programme.

"The Tax Incentive Programme is a very good one as it offers significant tax breaks. When undertaking major upgrading projects, this translates into considerable cost-saving benefits," Hind said.

The insurance firm first accessed the TIP in 2003, when it applied for and received tax breaks on improvement work carried out to the canteen and car park at its King Street office.

Since then, NEM has renovated the ground and third floors and is completing extensive refurbishing of the exterior of the building.