Will the real 'Delcita' stand up? 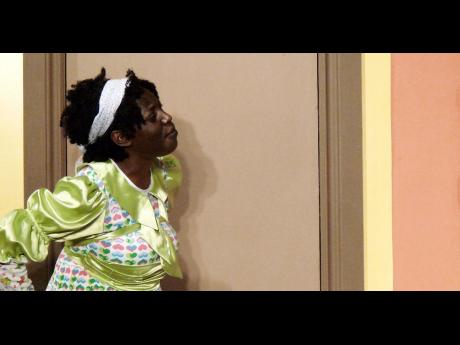 Wright in character as 'Delcita'. - Contributed 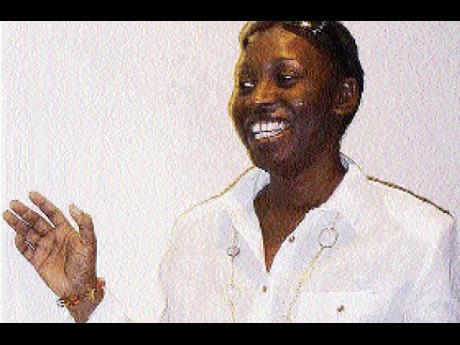 Sitting around a table with a straight face, ladylike poise, eating a sandwich and drinking a cup of Ting from a straw, wiping her mouth gently at intervals, Andrea Wright was the total opposite of the character Delcita whom she has made popular in the theatre.

When she began speaking, it was even clearer that she has very little in common with her onstage character, as she was very eloquent. Wright explained that she is nothing like the sometimes disfigured, loud, rotten-toothed character which was born in 1996 when she appeared in the play Mr Dweet Nice.

"The things that Delcita does, I wouldn't do. Delcita is brutally frank. She fears no one. It doesn't matter if you are the president of America or the queen of England. I am not as witty as Delcita," she told The Sunday Gleaner. "When I am onstage as Delcita, mi gone. Behaviour off because I am totally consumed by the character. I do about 10 ad libs in the show but don't ask me where they come from. Switching into Delcita is an auto; the costume is an auto button. I love the character. I adore the character and it's very therapeutic."

Wright is so consumed by the character that people do not believe that she actually plays Delcita.

"Dem hiss dem teeth. But I can't go put on the make-up for you to believe me," she said, noting that the only things she has in common with Delcita are that they are both genuine and from the country.

Wright said she grew up in North Western Clarendon and attended Edwin Allen High School. She said she has been living with her grandmother since she was just a baby.

"I love country. It was great. She (grandmother) taught me to be humble and instilled great moral values and I had great spiritual upbringing," she said.

After high school, she attended Shortwood Teachers' College where she studied primary education. That was followed by a marketing course at the University of the West Indies' School of Continuing Studies. She also received a certificate in small business administration. It was while there in 1989 that she met theatre writer Paul O. Beale, who was putting on a play and seeking actors. She auditioned and was cast as an old woman in the play Mus Mus Tail, which was her first commercial production.

Wright said there was not much difficulty in playing the role, as she did acting and singing while in high school and at church. She received many accolades for her efforts at various levels. Having got professional training at that level, acting in Mus Mus Tail was somewhat natural for her.

Having completed a course in information technology and being the first Jamaican woman to be an A+ certified computer technician, she opened her own computer business where she taught classes. She also lectured part-time at Caenwood Centre.

"I was doing shows in the meantime," Wright indicated. "There were times when I was doubling up. It can be rough. At times it was very stressful, especially when you have rehearsals because you have to learn that script," added Wright, who played the popular Pumpkin in Granny Rule.

When she gave birth to a daughter in 2002, it became even more difficult to double up. She said there were times when her child would spend all day at the baby-sitter as she would sometimes get home at 10:30 p.m.

"I said this is not going to work out. I said the best thing to do is go back home and spend some time with my child and then relaunch myself. That was like a divine intervention 'cause as soon as she was six years old, I got the call to do Delcita," she told The Sunday Gleaner.

Delcita was relaunched in 2008 in Di Driver, which also starred Keith 'Shebada' Ramsay. Since then, she has done Money Worries, The Xtortionistz and The Plumber, which is currently running.

"Once I am given the task of Delcita, I try my best to rise to the occasion," Wright said.

She said she decided to take a break after The Xtortionistz last year because she was frustrated, however, the break was short-lived as Beale requested her for the role in The Plumber.

While the character is one of the biggest in local comedy, Wright said she has not received many awards for her efforts. However, she has got awards from Stages Productions and she was honoured by Wisynco yesterday for excelling in her career.

"There is not much awards, it's more rewards. Media people want to have me on their shows. You feel great when you see how much of these people want to talk to you," said Wright, who is completing a degree in guidance and counselling at Northern Caribbean University.

In addition, she paid homage to Ralph Holness and Beale for their work in theatre. For their support, she thanked her daughter, Stages Productions, her friends and fans.