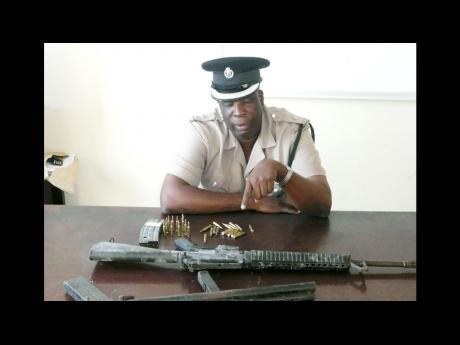 THEIR TONGUES have been muted by years of fear and terror, so now, the silent cries of the people of Waterhouse in St Andrew for an end to bloodshed and violence go unheard.  Sad eyes tell their stories.

They have seen it all - the ghastly effects of gang warfare - for more than 40 years. Hundreds, perhaps thousands, of lives snuffed out by the gun; families shattered; a community splintered into factions.

Today, the scars are there for all to see, in a terrible culture of violence that has become entrenched in the community.

In a bitterly divided community, the people of the area continue to fall by the bullet, while others look on helplessly, as gangsters from one section of a street continue to be engaged in bitter combat with the other section.

The combatants are mostly the young who attended the same schools a short while before.

When a man called 'Father Forsythe', now deceased, established the Buckers gang in the early 1970s, there was no way he could have foreseen the tragic impact that his action would have wrought on his community.

Many who have survived a series of bloody elections and an unending stream of gang warfare still live in the violence-ravaged community.

But many of their fathers and mothers, brothers and sisters, friends, relatives and loved ones were not as fortunate.

The endless spectre of fear, distrust, anger and grief is palpable; the silent tears continue to flow - a community traumatised by terror.

Life is hard in Waterhouse, for some sections more than for others.

Outsiders are fearful of venturing inside, with some justification. They attract looks of distrust from those who live in the community, knowing that a drive-by shooting could take place anytime.

None in the community can point to any gains from the violence, but the youth seem to know no other way.

Reprisals seem inevitable and the violence is perpetuated.

The Buckers gang emerged in the People's National Party (PNP) stronghold of the community to fend off the assaults and launch its own foray against the equally notorious Yap Sam gang, located in a section of Olympic Way and its environs, a Jamaica Labour Party (JLP) stronghold, in the lead-up to the 1976 general election.

The gangs emerged just about the time that the Gun Court and the Suppression of Crimes acts were enacted.

In the name of politics

As they did in other sections of Jamaica, soldiers combed the communities of Waterhouse night and day during the state of emergency, but this did not prevent fierce battles from being waged - all in the name of politics.

So did the state of emergency.

But the Buckers and Yap Sam gangs survived the onslaughts by the long arm of the law and the violence they carried out on each other.

The demarcation lines were clearly drawn in 1976, and thereafter, an uneasy calm lingered, with sporadic outbursts of gang violence in the intervening years to 1980.

The post-1976 period proved to be a particularly tough time for students who lived in the community.

After completing their primary-level education at Balcombe Drive, Seaward and Balmagie schools, those who were not successful in the Common Entrance Examination would gravitate to Penwood Junior Secondary School (later Penwood Secondary then Penwood High).

Balcombe Drive School was located in the PNP stronghold, and Seaward and Balmagie in the JLP area.

On the opposite side of the Sandy Gully was the Drews Avenue Primary School.

Students who failed the Common Entrance would go to Pembroke Hall Junior Secondary School, somewhat out of harm's way in those troubled days.

As the pressure intensified for students, some dropped out of school to join the gangs in their communities, while others struggled through secondary and high school.

By 1980, the political hostilities returned with unprecedented vengeance.

Among those who left Penwood School prematurely was an affable student named Vincent.

His good nature, however, seemed to leave with him when he left school.

His so-called exploits were noised about in a community which had become much too accustomed to bloodshed.

Naturally, his notoriety made him a main target of his enemies.

As the death toll spiralled on the eve of the 1980 general election, Vincent was shot multiple times.

Miraculously, he survived but was confined to a wheel chair.

But even the wheelchair could not stop Vincent.

His notoriety grew as he took on his opponents with renewed vengeance, though he was unable to walk.

Then the unthinkable happened.

They came for Vincent one fateful night to take him out once and for all.

The men stealthily approached Vincent's house in the dead of the night, crept to a window and saw the silhouette of a person lying on a bed in a room.

They fired and fired, and fired again, hitting their target every time.

But when the smoke cleared, the victim turned out to be Vincent's innocent niece, Lyn, barely identifiable in a bloodied heap.

But not for long.

The gang leader was eventually shot again, but stubbornly refused to succumb to his injuries.

Confined to bed, sores draining away his life, Vincent died a painful death.

Waterhouse limped back to normal, but the community would never be the same.

Yap, now deceased, had finally defeated his old political rival, the PNP's Carl Thompson, who had served two terms between 1972 and 1980.

In 1980, violence of a different kind erupted in the community, shocking the country by its unprecedented nature.

The incident so rocked the nation that Michael Manley - who was only the leader of the PNP as he had boycotted the elections three years earlier, was out jogging when the news broke - immediately jumped in his vehicle and headed for the community, numbed with shock.

But in typical anticlimactic fashion, the police killer eventually became a victim of the life he led, killed by his cronies.

Acts repealed in the '90s

The Suppression of Crimes Act and the Gun Court Act, which were intended to crush gangs and gun-related-activities, were repealed in the 1990s.

The Government conceded that they served to allow members of the security forces to breach the constitutional rights of Jamaicans, especially those who lived in poor communities like Waterhouse.

Nurtured by a culture of violence, the Buckers gang has outlived the measures which were intended to crush it.

However, the gang has also outlived numerous members, who have died by the bullet - an eloquent testimony that war does not pay.

Later, the man who led the gang would adopt the name Alan Buckers.

He, too, has been cut down.

Today, Buckers, as the community is now popularly known, is split between two gangs - Dust and Sunrise.

The dire consequences of gang violence have reduced the community to a mere shadow of its former self.

Nonetheless, gang feuds continue to rear their head and youth continue to be ensnared in their clutches.

Sadly, most of the children born in Waterhouse between 1974 and 2010 were raised in that culture of violence.

Many are imprisoned behind the invisible walls erected so many years ago.

Some have escaped, but many others have not.