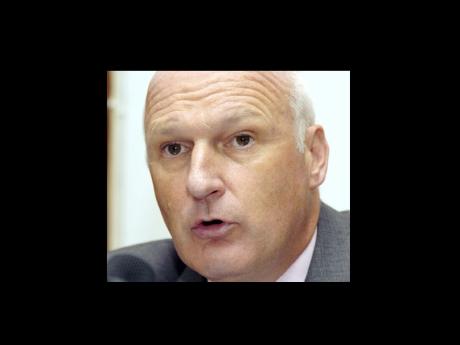 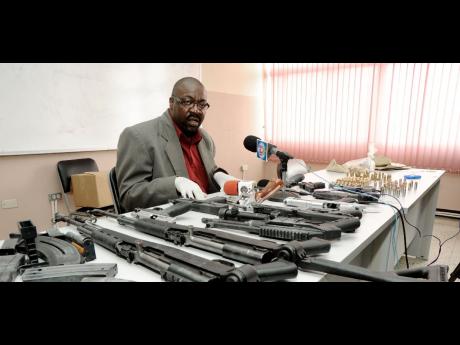 Inspector Steve Brown of the Jamaica Constabulary Force briefs members of the media on a gun and ammunition find at Port Bustamante at the Police Narcotics Department. Between 2007 and 2009, the lawmen seized 1,835 illegal guns and 20,729 assorted rounds of ammunition from the streets. - Ricardo Makyn/Staff Photographer
1
2

ALTHOUGH THEY have intercepted and seized scores of illegal firearms coming from Haiti, the local police believe that the majority of guns that are on the streets originated in the United States of America.

"Most of the firearms we recovered and traced were from the United States originally," Assistant Commissioner of Police Les Green told The Sunday Gleaner during a recent interview.

These numbers include guns and ammunition that were detected in wooden crates, electrical appliances and barrels at local ports.

Of the more than 500 murders committed in Jamaica over the past four months, at least 320 of the victims were killed by the gun.

But ACP Green said his team of detectives, with the help of their overseas counterparts, has been successful in tracing a number of these illegal weapons to the perpetrators.

"We have had joint investigations, and persons have been arrested in Jamaica and the US," Green said.

While not disclosing the figures, the assistant commissioner said persons have been convicted of gun smuggling in the past, and currently, there are cases in which persons from the US and Jamaica have been charged with drugs and firearm trafficking.

He explained that not all the persons arrested or convicted are linked to gangs.

When asked if entertainers were among persons suspected to be involved in the smuggling of illegal weapons, ACP Green said he would not get into operational matters.

But when pressed, Green said entertainers are considered by the police in relation to a number of crimes, and firearm trafficking is one of them.

"Entertainers have enormous influence on people; they have access to a lot of wealth. Now, if you have an entertainer who says shooting people is fine, what sort of message is that sending?" said Green.

As part of the way forward, the senior officer said the Federal Bureau of Investigation (FBI) would be setting up an office in Jamaica in another two years.

"We have been fighting for a long time for both the FBI and the Alcohol, Tobacco and Firearm (ATF) agency to have a presence in Jamaica. We already have the Drug Enforcement Agency," said Green.

"The ATF is more important because that's for firearm tracking. We will be meeting with the ATF next month. I hope it will enhance having a full-time ATF officer working here," Green added.