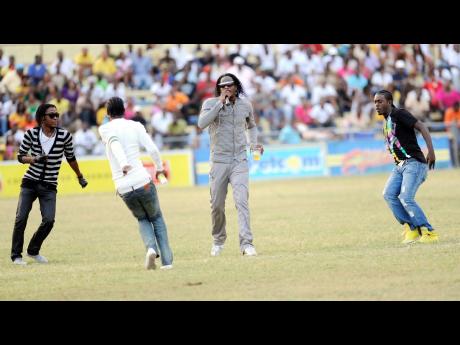 The Harbour View Mini-Stadium stands at pride of place in the community, not only as the home of the outstanding football team with the attendant publicity it brings to the area, but also its physical location.

The stadium is at the junction of two major entrances into Harbour View: Harbour Drive, which is the first road into Harbour View coming from Kingston, and Fort Nugent Drive, the main road from the roundabout into the community.

Before the complex was built it was known as 'Compound', and for some it has retained the name. Long-time Harbour View resident, singer Fredlocks, tells The Sunday Gleaner that he was one of the children in the new community who went to the then workyard and cut the grass among machines left there to make room for football games.

Joy Roberts, one of the initial home purchasers, remembers the rocky 'Compound' times and says, "Nobody knew grass could grow up there. It was all stone." She recalls the grass-planting efforts which bore green fruit.

It has come a long way since then and is now a modern football complex, the base of the under-13, under-17, under-20, under-21 and senior teams, as well as the women's team and the 'First Kickers', five- and six-year-olds being introduced to the game. There is a 'Roxy Williams' stand , and an area for the media which is given extra elevation.

But the mini-stadium elevates not only football, but also members of the community deemed to have made a sterling contribution. So the area outside the 'Home' and 'Visitors' changing rooms serves as space to honour them, names written on plaques mounted on a wall. The 'Tower Award' goes to "a resident of Harbour View who has made a considerable contribution to the lives and/or welfare of the community", going in 2004 to Carvel 'Daddy' Stewart, and the following year to Wilfred 'Daddy Rob' Roberts, then Mary Bond in 2007.

The 'Posthumous Award', with which Keith 'Daddy' Phillip and Roxy Williams have been honoured, goes to "a deceased resident of Harbour View who has made a considerable contribution to the lives and/or culture of the community".