Anti-crime initiatives fail because Jamaicans refuse to 'inform' on criminals 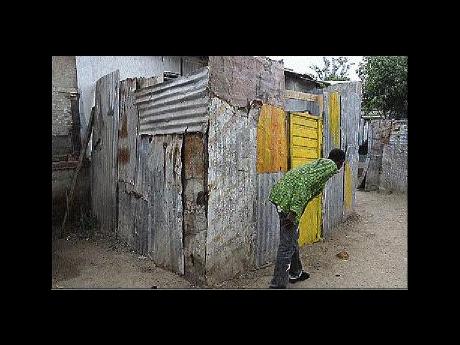 A 'code of silence' in Jamaica's inner city is one of the factors clouding the relationship between citizens and the police. - Norman Grindley/Chief Photographer

IT IS a well-known fact that in Jamaica's inner-city com-munities if you 'inform' to the police, you do so at your own peril. This entrenched code of silence is severely hampering the efforts of law-enforcement agents to curtail the island's galloping murder rate.

With just under three million people and more than 500 murders within the first four months of this year, Jamaica's murder rate per capita is among the highest in the world.

While increasing its anti-crime activities and reinforcing key elements of its crime-reduction plan, the Jamaica Constabulary Force (JCF) is once more reaching out to citizens.

"In order for policing activities to work and ensure the safety and security of all Jamaicans, it is important that citizens continue to support the police by sharing information about criminal activities even where those involved are related to them," declared Police Commissioner Owen Ellington last week in another plea to the country.

Ellington was supported by Assistant Commissioner of Police Justin Felice who issued his appeal at a Gleaner Editors' Forum last Friday as he announced plans to rid the force of corrupt cops.

"We are going all out, and we intend to use covert police activity in all areas."

The level of success will, however, depend on erasing the "informer fi dead culture" - an anti-police dogma deeply ingrained in inner-city communities where the majority of crimes are committed.

This street code of silence, says noted psychologist Dr Leachim Semaj, is a social construct enforced through various fears, including retribution and ostracism.

"It's a natural distrust that rural folk and the poor have against the police, and it has its origin within the Government and the police force itself," says Semaj, who sat on the last committee set up to evaluate Jamaica's crime-reduction strategies.

"The rules that govern policing strategies did not come out of the society, they were imposed on the people from colonial days. In other words, they have no origin in common law. For example, the core culture of ganja is not illegal, the Government made it so."

The situation, Semaj says, was made worse with the imposition of the Suppression of Crimes Act in the 1970s.

"This act gave the police no just reason or due process to trespass on the rights of the people, and it helped to fuel anti-police sentiments. Added to this is corruption in the JCF. People know this and find it hard to trust the police. You tell the police something, and the next moment you hear it in the community."

The psychologist offers two remedies: more effective com-munication between senior police officers and the people, and the use of popular culture.

"Some aspects of our music are the cultural soundtrack for criminal behaviour glorifying anti-social and destructive behaviour. We need to reverse this."

Board member of the Peace Management Initiative, a body established to mediate disputes in the inner city, Renard White believes distrust of authority - in particular law enforcement - is at the heart of the anti-informer problem.

"They (population at large) see high-profile people, including politicians, do things - give out guns, pay money to extortionists - and they get away with it. The people are, therefore, unwilling to give up their own," says White.

To break the street code of silence, "an almost sacred pact," White suggests a shift in the strategies used in community policing.

"Many of the police who work in the inner city will have to reform their approach. Hard policing does not work, it further drives people underground. Also, some police have developed the reputation as a killer - they go in and kill, no questions asked. Others go on the corner and issue threats. This approach builds resentment, it does not work."

The Kingston Eastern Police are seeking the assistance of the public to find a group of men believed to have engaged them in a shoot-out in Rockfort before escaping leaving behind a 12-gauge shot gun with 10 cartridges.

The men have been identified only by their aliases:

Information can be passed to the police in confidence at 924-4200, Crime Stop at 311, Kingfish at 311, police 119 emergency numbers, or the nearest police station.