Friend, not foe - US Embassy opens its doors in bid to allay negative perceptions about its visa process 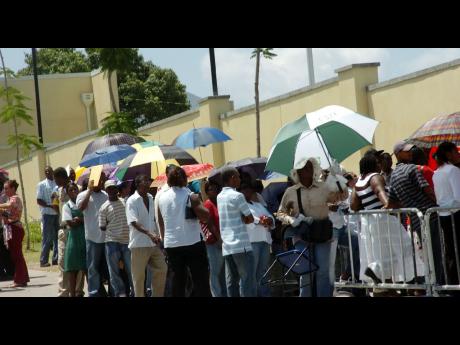 High-ranking officials at the United States (US) Embassy in Kingston are seeking to assure Jamaicans that America remains a friend of the country and not a foe. In an unusual display of transparency, the embassy opened its doors to the press last Friday and gave a never-before-seen view of the operations inside the bowels of its Old Hope Road complex.

The move was in sync with the more conciliatory diplomatic posture announced by the Barack Obama administration.

David Stone, consul general at the US Embassy in Kingston, said contrary to popular belief, consular officers, who conduct the visa interviews, do not get a kick out of turning down an applicant.

Stone said the officers do not set out with the preconceived intention of turning down an applicant.

"The embassy does not enjoy turning down applications. The consular officers are human beings," he said.

Not a tortue chamber

Laurence Tobey, chief of the visa section of the US Embassy, also sought to dispel the tales making the rounds about the mission's visa operations.

"The public thinks of it as a torture chamber, but it's not," Tobey said.

Rebecca Park, deputy public affairs officer at the US Embassy, told our news team that the mission has been trying "little by little, to open things up the best we can".

But that push towards trans-parency, designed to demystify certain public perceptions, must conform to the embassy's stringent security requirements.

Park admitted that the mission does operate like a "fortress" (our news team must concur, especially after the tour), but not without cause, as the safety mechanisms protect both embassy employees and visitors, which includes visa applicants.

She said while this show of a friendlier face was not a direct order from Washington, it is definitely linked to the diplomatic tone set by President Obama.

Park added that the public perception of the mission's operations matters to Isiah Parnell, the United States chargé d'affaires to Jamaica who took up office some seven months ago. "When he first came to town, he made it very clear that he wanted to open up a bit," she said.

After being read the rules of engagement which included no photographing of security personnel, security equipment or embassy employees, and no interviewing or interfacing with applicants, The Sunday Gleaner was given a tour of the property and a first-hand look at how the embassy does its business from the inside.

The tour was spawned by a Sunday Gleaner article entitled 'Serious vibes outside US Embassy' that was published earlier this month.

After going through two major security checkpoints which were equipped with high-tech security equipment, the virgin voyage began.

The property is pristine; immaculately kept, except for some dried leaves seen on the lawns. It was well fortified indeed. Iron railings line certain sections of the property.

It is deliberately compartment-alised in a manner that prevents access to key areas from certain sections of the property.

Several of the doors our news team walked through were heavy and metallic.

Because of the ban placed on interviewing the applicants, their faces would have to tell their stories. Some of the faces spoke eloquently.

Over in the immigrant section a lady was seen biting her nails. A sign of worrying? Not really. She did not look too concerned. The young woman was probably just passing the time by chewing on her nails.

As we made our way through the waiting/interview area, we could feel the eyes of the applicants piercing our skin, as they tried to decipher how the media managed to infiltrate the embassy's fortress.

Over in the non-immigrant section, a little girl, being held in the arms of a woman who was standing at one of the interview windows, was singing her heart out as her little feet dangled in mid-air. The woman did not join in the chorus.

Her documents were on the counter as she waited for the consular officer conducting the interview to return.

She had more serious business to attend to and was not yet sure if it was time to celebrate. Still, the little girl sang loudly as if she had not a care in the world.

In the midst of it all, a young woman walked away from the interview window and headed to the exit. She was not singing or smiling. A friend shouted to her, trying to ascertain if she had been successful.

She tried to tell him no quietly. He did not hear. That made it harder for her. She turned and mouthed "Mi no get it" to her friend and then turned and walked away.

Before you knew it, she had cleared the security checkpoint and was out of the embassy and standing on the median strip along Old Hope Road waiting to go across to the other side.

Another young lady was smiling, though. She touched another female friend on her way out of the interview area and flashed what appeared to be her approval card along with her pearly whites. You either leave happy or dejected. That is how the story ends.

There is now a concessionary stand, located adjacent to the building that houses the waiting area, where applicants can purchase refreshments and snacks while they wait to be interviewed.

"We are trying with the customer-service thing. We are really trying," said Fern Whyte, acting media coordinator at the US Embassy.

The embassy officials also revealed that plans are afoot to start construction on a covering that would provide shade for the applicants while they wait outside the embassy for their appoint-ments.

The design has been approved and construction should get under way later this year. "The driving force behind these designs are security, not customer service," said Stone of the construction of the US Embassy complex.