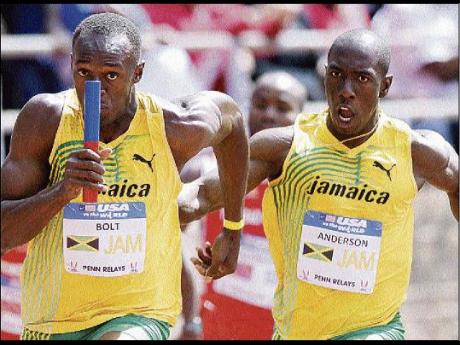 Jamaica's Usain Bolt (left) powering away on the anchor leg after receiving the baton from Jamaica Gold teammate Marvin Anderson in the USA versus the World 4x100 metres at the Penn Relays yesterday. Bolt's Gold team clocked a meet record 37.90 seconds. - AP

Usain Bolt ran a blistering 8.79 seconds anchor leg to pilot the Jamaica Gold Team to a meet record 37.90 seconds victory in a relay showdown featuring Jamaica versus the United States on yesterday's final day of the 116th Penn Relays at the University of Pennsylvania, Franklin Field.

The time was erased by two-hundredths of a second off the 37.92 which was set by the Americans last year.

The Gold Team's victory was set up by a brilliant second leg by Yohan Blake, with his team a bit behind after the first leg by Mario Forsythe. When Bolt got the baton on the anchor leg from Marvin Anderson, he was about even with the United States Blue team's Ivory Williams.

Bolt humbled the world leader over the 100 metres, moving away with ease to delight the very large crowd which had turned up to see him.

The United States team which also included Mike Rodgers and Shawn Crawford was second in 38.33 with their Red team, third in 38.50. The Jamaica Black team of Nesta Carter, Michael Frater, Xavier Brown and Dwight Thomas finished fourth in 38.72 seconds.

Bolt who earlier received a rousing welcome from the crowd for some five minutes when he went to the infield for his pre-race warm-up was very humble in his post race comments.

"I am very happy to come back to compete before this large crowd at the Penn Relays as I was very appreciative of the support they gave me. I am also happy that my teammates did well and gave me the baton in a good position so I did not have to work hard," he said.

In the Visa Championships series of relays, dubbed United States versus the World it was Jamaica that took the early initiative as the Women's Sprint Medley quartet of Schillone Calvert, Kerron Stewart, Melaine Walker and Kenia Sinclair won in 3:35.37. The United States Blue team was second in 3:38.53 with their Red team third, 3:39.55.

The Americans hit back in the sprint relay as their Blue team, anchored by Carmelta Jeter, won in 42.74 seconds with Jamaica second in 42.94. The members of the Jamaica team were Simone Facey, Kerron Stewart, Sherone Simpson and Shelly- Ann Fraser.

The Americans had two more victories as they won the men's and women's 4x400m. Running without their top star, Sanya Richards who got hurt in her warm up the previous day, The USA women took the 4x00m in 3:26.12 ahead of Jamaica in 3:27.72. The members of the Jamaica team were Rosemarie White, Novlene Williams, Kaliese Spencer and Shericka Williams..