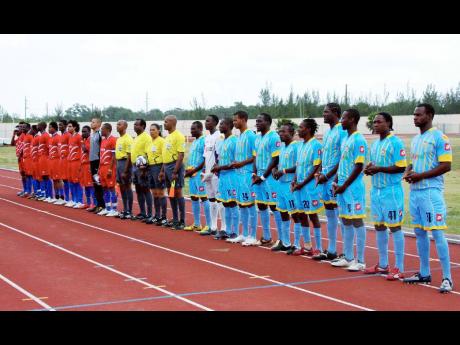 Members of the Waterhouse Football Club and the Haiti All-Stars, stand with match officials facing the crowd, prior to the kick-off of their fund-raiser for Haiti's relief efforts, in The Bahamas last Sunday. - Contributed

IT has not only been said, but proven, that it is in giving you receive. Waterhouse Football Club's participation in a benefit football match in The Bahamas last Sunday against the Haiti All-Stars team - for the Haiti's relief efforts - is turning out to be just that for the Drewsland outfit.

Financially, it never was, and was never meant to be rewarding for the club, which worked hard to convince its sponsors while garnering the millions needed to make the venture a reality.

In terms of the possibilities that have emerged for growth within their club though, team management, head coach and players are calling it a huge success.

"Everything that happened was great; the exposure, the camaraderie, the team spirit, we stuck together as a team on and off the field," said Bruce Bicknell. "As management we got to know the players better and I'm even more proud to be associated with everybody.

"We made a lot of friends. The bonus was winning," he noted of the 1-0 result achieved through midfielder Vincent Earle's 75th minute free-kick.

Continuing, Bicknell, who is also managing director of Tank-Weld Metals, the club's main sponsors, is of the belief that the experience will enhance the players' growth.

"I believe it gave the players something to look forward to in football and their life. The players realised that it doesn't just take talent. They can now become a more positive influence to people around us," he stated in obvious reference to their inner-city surroundings.

The level of maturity displayed by the players also left president Ricky Chin and head coach Geoffrey Maxwell quite pleased.

Chin, who also runs a company largely involved in musical production, wants more - to see his team enhance its appetite for victories on the pitch.

"I want to see the team develop a mean winning instinct. I think sometimes I still see smiles on people's faces when we lose. That needs to be wiped away," he reinforced. "It's not all about winning, but it's about winning."

Maxwell, a former national coach and veteran in the business, called it his 'best tour'.

He added: "In terms of development, anyone playing against foreign opposition must learn something from that particular experience and just hearing the discussions among the players and about other things in the game you realise that they learnt their lesson well.

"It was a good venture, moreso that the proceeds were for the Haitian relief fund," Maxwell continued. "The reception over there was very good for both teams and it was good exposure for these youngsters. It was also good that we won. Any exposure against any Haitian team is good because they play quality football."

Goalkeeper Richard McCallum, who often serves as the team's captain, attested to the quality of the Haitians, who number among four Caribbean countries to have qualified for the World Cup Finals. The others are Cuba, Trinidad and Tobago and of course, Jamaica.

"It gave the players a different experience, to play against a team of a different culture," noted McCallum, who has been involved in the national set-up on occasions. "The Haitians play so fast. They were good competition."

He added: "It gave them some form of exposure of what international football is all about," he added of his teammates. "Even if we didn't win I'd still feel that we achieved so much as we got to know each other so much better. This will help with the personal development of an individual, moreso a person who is travelling for the first time."

Youthful midfielder Kenardo Forbes, who sometimes shares the captain's armband, also cherishes the experience, even though it was kind of bitter-sweet.

"It was my first time in The Bahamas," pointed out Forbes, who was sidelined with an injury.

"I enjoyed the game as the players played with a lot of heart and put up a good performance," he stated. "Although I enjoyed the game, I would have enjoyed it better if I were on the field because in the crowd some of the Jamaicans were saying it's an enjoyment match and they wanted to see more 'pile' and so forth.

"If I was out there they wouldn't be saying that because I would've been giving them that sort of entertainment," noted the skilful player, who has been invited to Reggae Boyz training recently.

In spite of this, the team's performance against a team loaded with several Haiti nationals, appears to be working in its favour.

"The Haitians were so impressed with us that the night of the game we spent two hours discussing a rematch," said Bicknell. "The opportunity, it has opened new doors. They want a next match in the US."

That match, if it comes to fruition, could be played by August - thus presenting another chance for the club and its players to put on a show that could prove beneficial for the Haiti relief and themselves, should contract opportunities arise for their players.