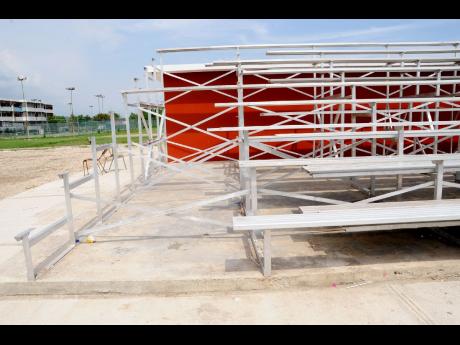 A section of the stands at the G.C. Foster College from which thieves took 11 pieces of metal seating. - Ricardo Makyn/Staff Photographer

The dirty side of the scrap metal industry, theft, which appears to be hitting the agriculture sector almost as hard as praedial larceny, seems to have found a new target - sports.

On Wednesday night thieves made off with material from a section of the still incomplete stands being erected at the G.C. Foster College of Physical Education and Sport in Spanish Town. The damage is estimated in excess of $1 million.

"They removed about 11 pieces of metal seating, each about 8-10 feet long, which in total would have seated about 100 people," Maurice Westney, one of the vice-principals told The Sunday Gleaner on Friday.

The thieves who also "stole quite a few bit of steps which were used to go up and down the levels" were only getting started as they returned the following night to continue the job. Their plan, he said, was averted by the alert security guards.

"While I have no real evidence that the material was stolen to be sold for use in the scrap metal industry, I strongly believe that it was for that purpose," said Westney.

According to Westney, a lot of planning and time went into the removal of the material.

"These metal sheetings were bolted down with each side having about 4-6 six screws, so with about 10 of them we are looking at, at least 100 screws, so it must have taken quite a while to disassemble and remove," he said.

While there is never a good time to be the victim of a robbery, Westney said it could not have come at a worse time.

"This is really a big blow for us at this time. The place was shaping up so nicely. The students in particular have been waiting for this facility for a while. They have had to stand up at events and just when it is time for it to be used now this," Whitney said of the area which was used in February for the Milo Western Relays and which was to be used for both track and field and football.

The stands which were a project of the Urban Development Corporation (UDC) with the erection spearheaded by the engineering unit of the Jamaica Defence Force (JDF) with labour provided by the local community, was scheduled to be handed over to the College at the end of last year.

On Friday, in a report in this newspaper, Minister of Agriculture and Fisheries, Dr Christopher Tufton, called for a suspension of the trading of scrap metal following millions of dollars worth of losses incurred by scrap metal thieves.

The National Irrigation Commission (NIC) had just completed and was about to commission this system, which was funded by the Inter-American Development Bank. The system would have benefited 100 farmers with more than 200 acres of productive land.

The sugar industry has also been targeted by scrap-metal thieves, suffering losses of approximately $87 million in 2009.