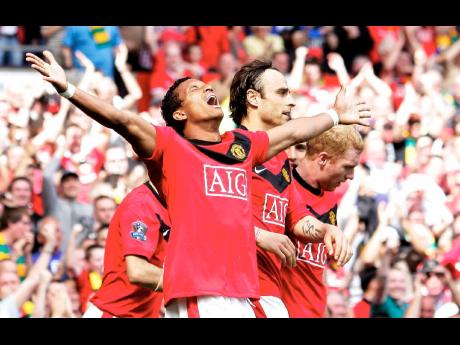 Manchester United ended Tottenham's winning run yesterday with a 3-1 victory that kept up the pressure on Chelsea at the top of the Premier League.

Spurs beat Arsenal and Chelsea in their last two games but Ryan Giggs scored two second-half penalties and Nani struck another goal to take the defending champions to 79 points with two games remaining.

Chelsea have 77 points ahead of their game against Stoke today.

"The main thing is we are top of the table with two games left," United manager Alex Ferguson said. "Who is to say what is going to happen? We have done our job."

Tottenham can still qualify for the Champions League for the first time if they win their remaining three matches, after third-place Arsenal held Manchester City to a 0-0 draw.

Arsenal restored Robin van Persie to their starting lineup for the first time in five months but the Netherlands striker was unable to breach a tough City rearguard.

With three former Arsenal favourites playing for City, the match was noticeable more for fierce challenges and six yellow cards than chances.

The draw left Arsenal on 72 points and formally ended their chances of winning the title. City have 63 points, one fewer than Tottenham, who play City on May 5.

Giggs opened the scoring for United in the 58th with a shot low to the left following a foul on Patrice Evra by Benoit Assou-Ekotto.

Tottenham captain Ledley King equalised in the 70th with a header from a corner, but Nani restored United's lead with a smart flick over goalkeeper Heurelho Gomes.

Giggs then made it 3-1 with four minutes left, shooting into the right corner after Wilson Palacios barged into Nani from behind.

But Tottenham's hopes of finishing the season in fourth place above City, who have spent about 200 million pounds (US$307 million) on players over the past two years in an effort to break into the elite, were boosted when City goalkeeper Shay Given was carried off the field late on with a shoulder injury.

At the other end of the standings, Hull had United States striker Jozy Altidore sent off and slipped closer to relegation with a 1-0 loss to Sunderland.

England international Darren Bent had already put Sunderland ahead in the seventh minute with his 24th league goal of the season when both teams were reduced to 10 men.

Altidore and Sunderland defender Alan Hutton were sent off in the 50th for clash near the touchline. Hutton threw the ball at Altidore after it went out for a throw and the U.S. international responded with a head butt.

The result left Hull in 18th place with 28 points. The Tigers' only chance of avoiding relegation is to win both its remaining games by big margins and hope West Ham loses its last two matches.

"It's not worked out the way we wanted to," Hull chairman Adam Pearson said. "We've been in the bottom three all season. We just didn't have that bit of quality.

"I can't say it's been a huge surprise."