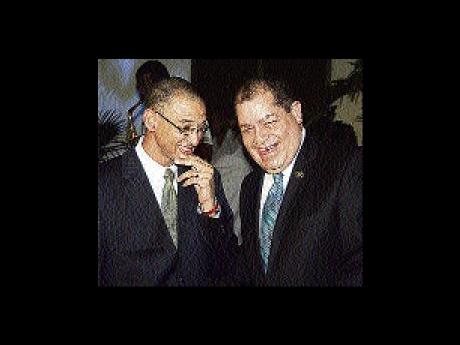 Minister of Finance and the Public Service, Audley Shaw (right) and his former junior minister of state now group chief operating officer at GraceKennedy Limited, Don Wehby share a joke at the official opening of the GraceKennedy Financial Building at the Fairview Shopping Centre, Montego Bay on Thursday. - JIS PHOTO

The finance minister, Audley Shaw, has again called for the lowering of interest rates to single digits, to boost production within the Jamaican economy.

"We have to have a consensus around bringing interest rates down in the economy. Irretrievably down to single digit interest rates, that is where we are going", he stated.

He made these comments while giving the main address at the official opening of the Grace Kennedy Financial Building in the Fairview Shopping Centre, Montego Bay on Thursday.

While pointing out that the Bank of Jamaica rate on 30-day instruments is now down to 10 per cent, the lowest rate in over 20 years, the finance minister appealed to the banking sector to assist the government in leading the way to more aggressively reduce interest rates on commercial bank loans.

"When you do that, you are going to stimulate the market for more loans, for more private investments, for more businesses, for more start-ups, for more small businesses to get going, for more attractions to be created in the tourism sector", he said.

Shaw also said the competitive framework and environment within the economy can only be enhanced when low interest rates are offered to entrepreneurs.

He described the Jamaica Debt Exchange (JDX) programme as a step along the way and thanked the financial sector for participating in the programme.

The JDX involves the exchange of high-interest government bonds held by investors for low-interest ones with longer repayment periods.