'Dragon' wings it back to number one 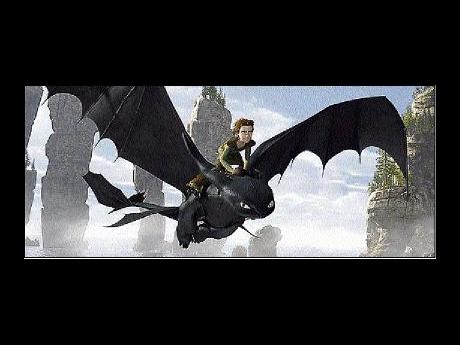 In this file film publicity image released by Paramount Pictures, Hiccup, voiced by Jay Baruchel, rides Toothless in a scene from 'How to Train Your Dragon'. - AP

How to Train Your Dragon continues to breathe fire at the box office, while newer releases are mostly blowing smoke.

The DreamWorks Animation adventure took in US$15 million to reclaim the number one spot in its fifth weekend of release. How to Train Your Dragon opened in first place in late March, then dropped back into the pack. But it has held up strongly and climbed to the top again amid a flurry of so-so new releases.

The tale of a Viking youth and his pet dragon raised its total to US$178 million and is on its way to becoming a US$200 million hit.

Premiering weakly at number two with US$12.3 million was Jennifer Lopez's romantic comedy The Back-up Plan, released by CBS Films. Another comedy, Steve Carell and Tina Fey's Date Night from 20th Century Fox, held up well to finish at number three with US$10.6 million, raising its total to US$63.5 million.

Among the weekend's other newcomers, the Warner Bros. action flick The Losers flopped at number four with US$9.6 million. Disney's nature film Oceans had a solid opening for a documentary, coming in at number eight with US$6 million.

How to Train Your Dragon nearly regained the number one spot the previous weekend but wound up a close second to Lionsgate's superhero comedy Kick-Ass. In its second weekend, Kick-Ass slumped to number five with US$9.5 million, down 52 per cent from its debut, lifting its total to US$34.9 million.

Revenues for How to Train Your Dragon were off a scant 23 per cent from the previous weekend.

"To be number one in week five, it's an exciting time," said Anne Globe, head of marketing for DreamWorks Animation. "Especially to be decisively number one after last weekend's box-office shenanigans."