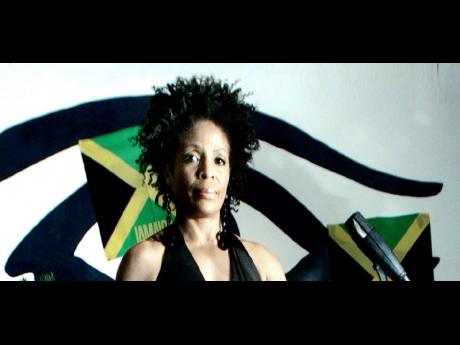 Sheila Hylton was juggling careers as a flight attendant and reggae singer in 1980 when she stepped into a London record store and bought a copy of The Police album, Reggatta de Blanc, which included the song The Bed's Too Big Without You.

Hylton, now 54, told The Gleaner last week that she was so taken with the song's reggae grooves she decided to record her own version on her return to Jamaica.

"One of the first things I said to myself was, 'It would be great to get Sly and Robbie on this song'," she recalled.

Hylton's rendition of The Bed's Too Big Without You, produced by the hot rhythm duo, was not only a hit in Jamaica, but reached as high as number 35 on the British pop charts. It remains her biggest hit.

Early this month, Hylton returned to the recording studio to cut a song with an entirely different flavour. Alongside fellow New York City reggae acts Elvis D and Lushy Ranks, she released Black, Gold and Green (To The World), a tribute to Jamaican track and field which was used by the country's delegation to the Penn Relays which ended last Saturday.

Hylton said doing the song was a satisfying experience. She stressed that it transcends athletics.

"The lyrics are pure patriotism. I think long after the 'Penns' are over the song will be relevant because it covers everything," she said.

Hylton has lived in New York City for 30 years. Though she is still active as a performer, mainly in the New York area, her recording schedule is not as hectic as the 1970s and 1980s.

Her last album, Steppin', was released in 2006. She believes most show promoters in the Big Apple cater to younger crowds and do not give traditional reggae acts a chance.

"Dancehall is cool, but I think people are starved for reggae in different forms," she said.

Born in London, Hylton came to Jamaica at age five. She listened to different forms of music while being raised by her maternal grandparents in Vineyard Town, east Kingston.

Her grandfather worked for Pan American Airways and was a jazz buff. She said troubled jazz stylist, Billie Holliday, was an early influence, but later she was drawn to Chaka Khan and The Police and their lead singer/writer, Sting.

Hylton's recording career started during the mid-1970s when she was a model and flight attendant with Air Jamaica. Her earliest efforts were two covers, Life In The Country (originally done by The Ebonys) and Don't Ask My Neighbour (first done by The Emotions) for producer Harry 'Harry J' Johnson.

She hit paydirt with Breakfast in Bed for the same producer in 1979. The song went into the British national charts, peaking at number 57. Two years later, she made an even bigger impact with The Bed's Too Big Without You, which was distributed by Island Records.

In the last five years, Hylton has performed alongside acts like Ken Boothe and Third World in Europe and California, and hosted events like the International Reggae and World Music Awards. She said she winds down by listening to an eclectic list of artistes, which includes her hero Sting, Willie Nelson and the latest in New Age.