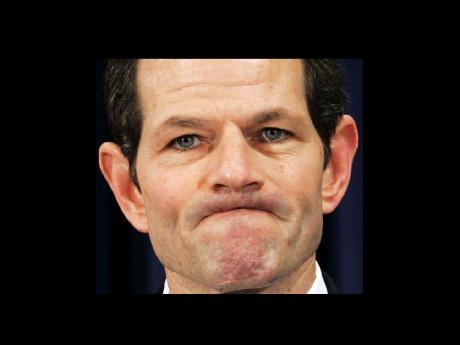 Though many of those interviewed for the film were in attendance last Saturday evening, the documentary's subject was not. Director Alex Gibney, whose Taxi to the Dark Side won the 2007 documentary Oscar, interviewed Spitzer four times over the two years he spent making the film.

Though it was billed as unfinished and does not yet have a title, Gibney said the film was "mostly finished". He made the film in tandem with author Peter Elkind, whose book Rough Justice: The Rise and Fall of Eliot Spitzer was recently released.

Ashley Dupre, the former call girl involved in the scandal, was not interviewed for the film. Gibney told the audience she asked for editorial control, which he refused.

Dupre said in an e-mail that she didn't want to grant an interview without "approval over the edit."

"I didn't think it was smart to participate after what I've seen with editing," said Dupre. "I think everyone is trying to move on with their lives and by me participating in their project would only open old wounds."

Gibney said he also discovered the identity of another prostitute, 'Angelina', whom Spitzer frequently visited. She wouldn't be interviewed on camera, though, so Gibney hired an actress to read her answers in character.

Often sitting on a couch in a suit with his legs crossed, Spitzer looks directly into the camera as he tries to explain why he continued to visit prostitutes before resigning in 2008.

"You cave to temptations in ways that seem easier and perhaps less damaging," he said.

The documentary tracks Spitzer's meteoric rise in New York politics and his crusades against Merrill Lynch, AIG and the New York Stock Exchange. The film also raises questions about the investigation into the Emperor's Club, suggesting that political motives may have been behind the investigation.

Gibney said Spitzer had not yet seen the film but is expected to soon.