Omar Frith off to the USA 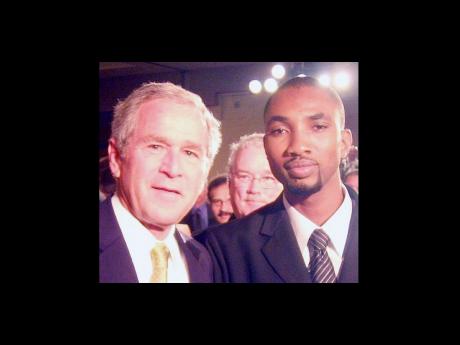 Omar Frith with then President of the United States George W. Bush at the White House Conference of the Americas in 2007.- Contributed

It was in July of 2007 while attending the White House Conference of the Americas as one of five specially invited leaders of the private sector and civil society groups from Jamaica. President Bush gave a speech at the conference encouraging deepened relations between the United States (US) and the Caribbean. After his speech, Frith had the opportunity to briefly speak with the president and thanked him for this progressive view of the role of Caribbean civil society. The encounter was recorded with a handshake and the president agreeing to a photograph.

The general manager of the Stella Maris Foundation, Frith admitted that he never dreamed he would one day meet the president of the US, or that he would choose community development as a career path. In the past, he had treated community service as an extra-curricular activity encouraged by schools.

Frith has become one of Jamaica's best community development leaders who has implemented numerous successful projects at the Stella Maris Foundation. His achievements were brought to the attention of the US Embassy, and he has been chosen to represent Jamaica in a first-of-its-kind US State Department-sponsored programme - 'Volunteerism: Together We Serve." The programme which began on April 12, ends on the 30th in seven states across the USA. The professionally enriching programme provides opportunity for over 100 participants from around the world, to be part of a youth service event on Global Youth Service Day.

Frith acknowledges that, when he was younger, he wanted to be an agent of change and learnt well from his mother's example that he was his 'brother's keeper'.

A skilled debater and former head boy of Manchester High School, who once had thoughts of being a lawyer, he wanted to utilise his passion and leadership skills to serve others in a very direct way.

He believes that the most important aspect of community development for Jamaica in the next five years will be social capital formation. This, he notes, can be actualised by creating the spirit of volunteerism. He notes that volunteerism has a 'feel-good' factor and should not be seen as merely a pastime, but as a strategic tool to development.

The Stella Maris Foundation located in the volatile community of Grant's Pen, St Andrew, has engaged a wide cross section of community members through skills training, employment and entrepreneurial training, mentorship programmes and social outreach on issues of HIV/AIDS prevention, drug-abuse awareness and a counselling psychology unit. It is expected that the seeds necessary to encourage increased volunteerism in Jamaica will be planted and bear fruit to enable the Foundation to be seen as a model of such voluntary activity, worthy of widespread emulation.