Kevin Frith rises from the ashes 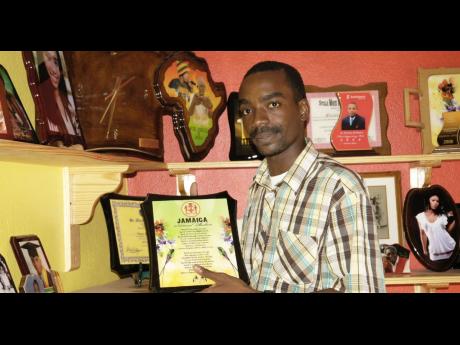 Kevin Frith shows off some of his pieces. - Contributed Photo 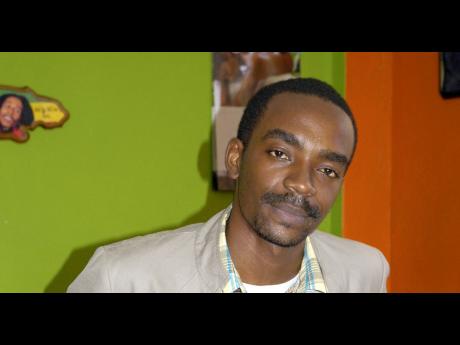 The only fatherly thing Kevin Frith's dad (who is an artist) ever did for him, was force him to help out at his work place daily after school. Consequently, that shaped his future as a businessman today.

Frith, 26, is owner/managing director of PCF Company Limited, a manufacturing company that produces souvenir and branded items and artist-based memorabilia. The young entrepreneur has had a rough life, but he has channelled his bad experiences into becoming the man he is today.

Frith recalled growing up in one of Kingston's volatile areas, Jones Town, with his grandparents and aunts. Living in such an unstable area was just one of Frith's problems, as he had to deal with financial woes. So, while other boys were playing, he was focusing on getting a summer job if he wanted to go to high school after leaving John Mills All-Age School.

He saved his earnings to send himself to Dunoon Technical High School, starting in 1999.

"Now that I had managed to send myself to school, not only did I have to face peer pressure but the escalating violence in my community," Frith told Flair in an interview.

His already unstable environment was about to be further shattered. His home was shot up in the crossfire of gang-related violence and soon he was homeless. At the time, Frith's uncle had a house on Waterloo Road that was unoccupied so his grandmother, an aunt and himself were allowed to stay there. But his stay was short-lived; once again he was without a roof over his head. The family court asked his father to decide on his place of residence.

"But my father refused to take me in. He said he couldn't based on the situation with his girlfriend." Frith was made a ward of the state. He was placed in the SOS Children's Village but after three days, he ran away.

"I just could not stay there, so I ran away. I got a little boy to steal some clothes for me, because we wore uniforms at the village, and I could not pass the police station down the road in it. It was a pair of girl's jeans but I didn't care. I put it on, grabbed my accounts book and ran away."

He went to his father and told him what he had done, but his father turned him away.

"When I told him what I'd done, he told me to go away because he did not want the police to arrest him for harbouring a fugitive. Now I was a homeless child once more. "

Frith ended up with his grandmother who was living in Rollington Town. Soon after, his cousin in Harbour View heard of his plight and took him in. Through all his bad experiences he continued school. Then a teenager, he began to hone the artistic skills he had picked up from working with his father in the past. He started printing graphics on T-shirts and making scrolls that he sold to his classmates. He also sold them at the craft market in downtown Kingston.

Though Frith had shelter, his other living expenses were not being met, so he found a way to make money. He got into the taxi business, the proceeds of which took care of school expenses and food. But, he hit another streak of bad luck on August 21, 2001 when he was hit by a JUTC bus and broke one of his leg in two places. He couldn't work or move around freely, as his leg was in a cast up to his waist and the cast would have to remain on for six months.

To make matters worse, after an incident with his cousin, he was out on the streets again. He returned to his grandmother who had to give up her little bed for him to rest his legs. The mother of Trevor Gayle, his friend, rescued him. She decided to take him in until his cast came off. Five months into his recovery, he went back to the taxi business because he realised that soon he would be back to square one.

After his recovery, he rented a room in Duhaney Park and continued in the taxi and printing businesses. In 2003, he quit driving the taxi and enrolled in the National Tools and Engineering Institution.

"While going to school I was juggling my printing business. And soon I began doing hand painting on coffee mugs and screen painting."

Frith told Flair that at the time he was making a little money, but he just saw it as a means of surviving.

"I did not have any business guidance so profit was not in the big picture for me back then." However, as the years went by he soon learnt the skills of operating a business.

After much trial and error in getting his business off the ground, he finally got a breakthrough. In 2006, he acquired a location on East Street, Kingston, where he expanded his business and clientele. He had just refurbished his office with a loan of $1.3 million, when he was struck by theft. Thieves took all his furnishings, machinery and customers' orders. He was completely wiped out.

"It's a good thing I was strong because it was a very rough time. In addition to losing everything, I had two dependent children."

Frith didn't give up. Shortly after, he found a new location on Slipe Road and rented it with some savings. In 2007, for the then 22-year-old, luck was about to change. He approached RBTT for a loan and not only was he able to continue his business, he gained a business partner as well. With the partner's capital investment and time, the fledgling business became PCF Company in 2007. It is not just operating in Jamaica but it also trades goods in the United Kingdom, Canada and the United States of America.

Frith said that his company has undertaken to raise $20 million to assist four charities including the SOS Children's Village over a four-year period. Now that he is in a position to help others, he is doing his part to assist children in need because he knows what it is like to be like them.