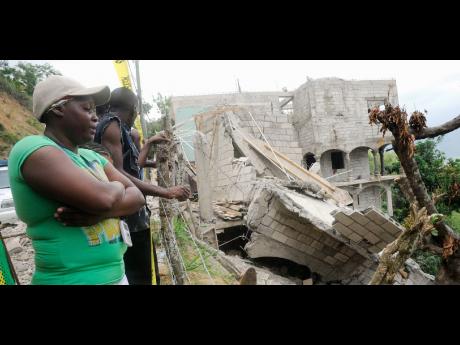 The Kingston and St Andrew Corporation will be launching an investigation into the circumstances surrounding the collapse of sections of a four-storey house in rural St Andrew yesterday which caused the death of a contractor.

"It is really unfortunate," Greene said. "We will be asking the city engineer to visit and find out what is the cause of the collapse. We have to determine if approval of the structure was given and, if approval was given, if it was followed."

Greene said if it was found that the building was not done to the requisite standards, action would be taken.

It was a gloomy Sunday morning for residents of King Weston in rural St Andrew yesterday, after the tragedy struck on the site when sections of the building collapsed, killing 48-year-old Denton Redwood and injuring Sherman Britton, and two men identified only as Blake and Duggie.

A policeman on the scene, who refused to give his name because he was not authorised to speak on the issue, said the building collapsed about 11:45 a.m., minutes after 30 of the workers exited the building for lunch.

The four who lingered were working at the top of the building when a loud noise was heard. After the collapse, the four men were found at the foot of the hill adjacent to the house.

Redwood was rushed to the University Hospital of the West Indies where he was pronounced dead. The other men were rushed to the Kingston Public Hospital where they are said to be in serious but stable condition.

When The Gleaner arrived at the scene, scores of persons gathered at the area viewing the horrific sight of the rubble from the building that was erected only metres away from a gully.

Leroy Seymour, one of the workmen who narrowly escaped death, said the incident was like a horror story that would stick in his mind for a while.

"I heard the building collapsed and I rushed to the scene and helped the boss. It was a terrible sight," he said.

Another workman, Steven Dawkins, described Redwood as a kind and humble person who would be sadly missed.

Community members were also in despair.

"It is very unfortunate because the man was such a nice man and him come dead this way," one community member said. "Him always do this work and me never hear nothing like this happen. Me no know how this could happen. We are going to miss him."

The owner of the building, Fabian Latibeaudiere, was also puzzled by the incident.

"I can't say what is the cause because I don't see anywhere like the place tear away or anything like that ... the top floor drop on the bottom floor and the bottom floor stand up same way," he said.

"I am just sorry to know that someone died but I know that anything can happen in life," he added.

Member of parliament for the area, Andrew Gallimore, who said he was saddened by the incident, urged persons carrying out building activities to do so with care.