'Earth is our business' 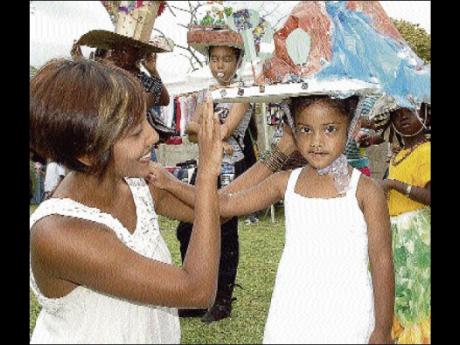 Four-year-old Azhara Chin of Sts Peter and Paul Preparatory is the centre of attraction with her 'waterfall hat' at the school's Earth Day expo on Saturday. - Colin Hamilton/Freelance Photographer 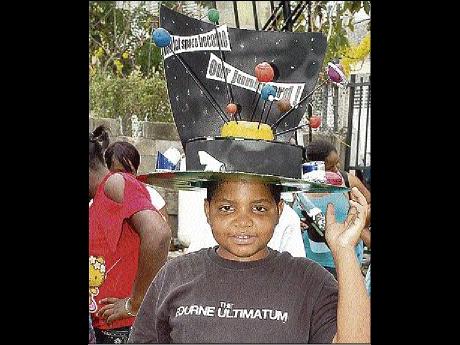 Ten-year-old Jason McNorris brought attention to an environmental issue that is picking up speed in mainstream media across the world. Space debris, also commonly referred to as space waste, orbital debris or space junk, is waste matter that can be found in outer space.

Space debris, is found in different forms, including but not limited to, satellites that are out of commission, fragments from collisions occurring between man-made objects and spent rocket stages.

"You shouldn't make a space junkyard," McNorris said, wearing a specially crafted hat that advocated against rubbish in space.

"We're not just polluting Earth, but space also," he continued. "Say 'no' to space junk."

McNorris and other students took part in a hat parade at the school's expo on Saturday, using creativity as a method of making each other more aware of the environmental issues of the day.

Other hats included a plastic skeleton and another showingunderwater biodiversity.

"There is a jelly fish, an octopus, a puffer fish, coral and a clown fish," five-year-old Kahlil Smythe said, describing his work of art.

"Earth is everybody's business," said Heston Hutton, president of the HSA. "This is a fun way of incorporating the environment."

Educational resources were also available such as the British Broadcasting Corporation's documentary Planet Earth being shown in a mobile theatre; and information on backyard gardening, recycling and water conservation.

"We said let's look at Earth Day and use that so the children can learn about the environment in a physical way," said Karen Siyanbola, principal of Sts Peter and Paul Preparatory.

"The hat parade will help to give the children a concrete understanding of conservation," she said.