Gordon rallies from surgery to grab MVP award at Penns 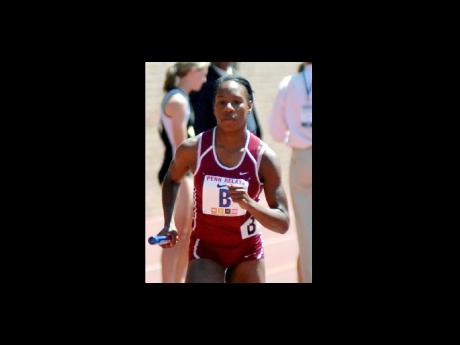 Holmwood Technical's Chris-ann Gordon sets off on the final leg of the 4x800m high school girls relay at the Penn Relays, University of Pennsylvania, on Friday. - Contributed

HOLMWOOD Technical returned to winning ways at the Penn Relays this year after failing to secure a single win in 2010. They returned with a vengeance as for the third time at this relay carnival, they captured a triple, winning the 4x100, 4x400 and 4x800 metres. They also accomplished this feat in 2001 and 2006.

When they captured the triple in those years, they also claimed the MVP award for relays with Sheryl Morgan, the 2001 winner; and Sonita Sutherland, copping the award in 2006.

One of the athletes who played a key role in Holmwood's success this year, also walked away with with the MVP award - 15-year-old Chris-ann Gordon - after two brilliant anchor legs on the 4x400 and 4x800 teams.

On both occasions, defending champions Edwin Allen, which had beaten Holmwood in both events in 2009, had to settle for second.

Gordon, in a Gleaner exclusive after being notified of her MVP accomplishment, was very elated.

"First I would like to thank God, my parents and my coaches, especially Mr Wilson (Maurice), for winning this award. Without them I would not have got the opportunity," said Gordon, who also thanked her teammates who shared victories in both events.

"I am happy to know that I was able to compete because I started training only in January instead of September because I had surgery for appendicitis and had to miss the first four months of background training," she pointed out.

In fact, her first competition was at the Gibson Relays in February, where she only competed in the 4x400m.

Despite the late start, Gordon who won the class Three 400-800 double at Champs 2009, said she was not worried.

"My coach was not rushing me because this was my second year in the class and he was confident that I had the beating of everyone here and they were slowly getting me into shape," said Gordon.

She went on to capture three gold medals at this year's championships, repeating her 400-800 success, as well as copping a 4x400 relay victory.

Gordon, who attended Clarksonville All-Age in St Ann, stated that she was a long-distance runner at her previous school.

Gordon did not win in her first year in Class Four but since then, she has been unbeaten as the following year she captured both events as a second-year athlete in Class Four. Last year she switched to the 400 and 800 metres and advises her peers to listen to their coaches and be respectful if they want to be successful.

She also lists Shericka Williams and Veronica Campbell-Brown as her role models.

"I like both athletes because Williams is a very good 400 metres runner and I love this event, while I like Cambbell-Brown because she is very humble,".

Gordon, who will celebrate her 16th birthday in September, is now looking forward to the World Junior Championships in July.

"At this moment I do not know what my coach will be doing but if I am fit enough to compete I would like to go to the World Junior Championships and at least bring home an individual and a relay medal for my country," said Gordon.