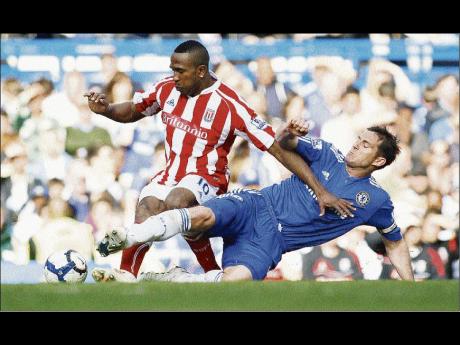 Salomon Kalou scored three goals and Frank Lampard two as Chelsea beat Stoke 7-0 to stay a point ahead of Manchester United in the Premier League title race yesterday, while Burnley were relegated after one season in the top flight.

The pressure was back on Chelsea after United beat Tottenham 3-1 on Saturday. But two strikes by Kalou and Lampard's penalty put Carlo Ancelotti's team 3-0 up by half-time. Both scorers, plus Daniel Sturridge and Florent Malouda, added more goals in the second half.

Chelsea have 80 points and United 79 going into their last two games of the season, and Ancelotti's team now has a much better goal difference should they wind up level. Chelsea visit Liverpool and host Wigan, while United go to Sunderland and welcome Stoke.

Despite the 7-0 win, Ancelotti doesn't believe the title will be decided on goal difference.

"We will not be even with Man United (on points). One team will be first," the Italian said.

Aston Villa and Liverpool both won to improve their chances of clinching a Champions League spot for next season.

Villa's penalty was awarded in the 83rd minute when Roger Johnson brought down striker Gabriel Agbonlahor. Several Birmingham players argued with referee Martin Atkinson that Johnson had played the ball first but the official gave the spot kick, which Milner drove home.

Birmingham manager Alex McLeish, who confronted Atkinson after the game about the penalty decision, was convinced it was not a foul.

"It was a great tackle, simple," McLeish said. "It was a bad mistake by the ref. He was not up with the play. It was a great touch by Roger Johnson. He's made a name for himself in the Premier League with tackles like that."

Villa manager Martin O'Neill, whose team guaranteed at least a place in next season's Europa League, was just as sure it was a foul.

"There's no dispute about it, it's a penalty kick," he said. "I've seen it back since and it's a definite penalty."

The victory lifted Villa into fifth, level on points with fourth-place Tottenham and above Manchester City but having played a game more than both. Tottenham lost 3-1 at Manchester United on Saturday and City drew 0-0 at Arsenal.

The hunt for fourth

Maxi Rodriguez and Ryan Babel hit the target after Gerrard's two strikes early in the second half to keep Liverpool in the hunt for fourth.

Although Liverpool stayed seventh, they are only two points behind Tottenham and Villa and a point behind City. Next weekend, Man City host Villa, Tottenham welcome Bolton and Liverpool are at home to Chelsea. Three days later, City take on Tottenham.

Promoted through the League Championship play-offs last season, Burnley are now guaranteed to go down along with last-place Portsmouth. Hull appear almost certain to join them as they are six points behind 17th-place West Ham with two games to go, and with a much inferior goal difference.