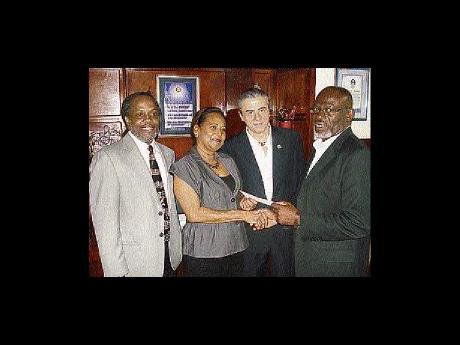 From left: Lloyd Stanbury, Shirley Hanna and Fernando Garcia Guereta of Nice Time Productions, and Burchell Duhaney, principal of the Edna Manley College of the Visual and Performing Arts. The event was the handing over of a commitment letter for Nice Time Productions to fund a scholarship at the college. - Contributed

One lucky Edna Manley College of the Visual and Performing Arts (EMC) student will benefit from a scholarship started by Nice Time Productions, the company's third charity venture to date.

Nice Time Productions, which produced the award-winning documentary Why Do Jamaicans Run So Fast? that includes interviews with gold-medal winning athletes Usain Bolt, Shelly-Ann Fraser and Melaine Walker, will be offering a full three-year scholarship to an EMC student in September.

The recipient of the Nice Time scholarship will be a student participating in the diploma programme in performance offered by the music department of the college.

The scholarship was initiated through the efforts of the recently formed Jamaica Arts Development Foundation Inc (JADF) and its president Lloyd Stanbury, who also represents Nice Time Productions. The JADF has been in dialogue with the EMC administration in recent months with a view to facilitating development support for the college. The establishment of this scholarship is the first initiative in that development.

Prior to the Edna Manley scholarship, Nice Time has offered assistance to students at GC Foster College as well as the Creative Productions and Training Centre.

Nice Time president and director of Why Do Jamaicans Run So Fast?, Fernando Garcia Guereta, said he was very happy for this opportunity to contribute to the provision of training for talented Jamaicans. He said he was also looking forward to more collaborations between Nice Time and EMC.

According to Hanna, needy students who are entering their first year at EMC will be chosen by the headmaster of the school and from there a selection team will be set up to interview the students and choose someone from that crop. The scholarship will cover the cost of the diploma programme throughout the recipient's three years of school.

"Everyone is just so happy about it - everyone at Edna Manley and everyone here at Nice Time. We have much more things to come from Nice Time as well," Hanna said.

It was the only non-American film nominated that year.