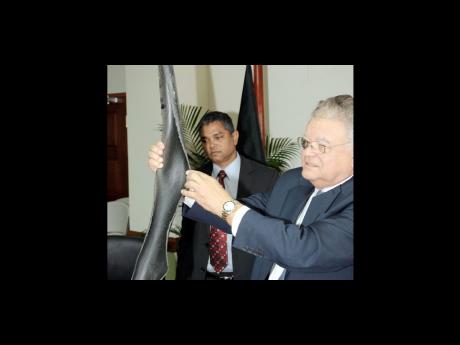 Karl Samuda (right), minister of industry, investment and commerce, shows journalists housing that was stripped of its wires, while Michael Stern, state minister in the industry ministry, looks on during a press conference held at their New Kingston offices yesterday. - Norman Grindley/Chief Photographer

A BAN has been placed on almost all scrap metal export as Government yesterday moved to put a stop to rampant criminality that has laid seige to the industry.

Minister of Industry, Investment and Commerce Karl Samuda said yesterday that only manufacturers who generated their own material and did not buy from other sources would be allowed to export scrap metal as of tomorrow.

Samuda, who made the announcement during a press conference at his ministry's New Kingston offices, said the decision was taken in the wake of the theft of millions of dollars worth of infrastructure across the island, and most recently, at the Colbeck irrigation pumping station in St Catherine where scrap metal thieves vandalised critical agricultural equipment, with losses estimated at some $5 million.

"(This is) denying the oppor-tunity to a number of farmers of having water supply that they have not had in the area for some 25 years," Samuda lamented.

Containers to be inspected

The ban does not apply to containers that are already in the ports. Other containers, which have already been packed, will be inspected by a special team comprising the Jamaica Customs Department, the police and other stakeholders, and then repacked.

The minister said the Customs Department has committed to having the process completed by Friday.

Last Wednesday night, thieves made off with material from a section of the still-incomplete stands being erected at the G.C. Foster College of Physical Education and Sport in Spanish Town, St Catherine. The damage is estimated in excess of $1 million.

"This scrap metal industry is sick and needs to be stabilised, and that is what we are going to do," the minister said.

Samuda said the decision to institute the ban came after scrap metal dealers, who pulled in an estimated $100 million last year, failed to provide him with satisfactory information during a meeting held earlier yesterday morning.

Effective immediately, there will be no further export of copper.

"No metal that is smelted prior to being packed will be permitted for export," Samuda said. "The metal must be in its original state. It may be compacted, it may be cut up into pieces, but it must remain in its original state, and that is particularly in respect of certain types of metal. They must not be processed in any way at all."

The minister said he would outline the new guidelines for the scrap metal industry during a presentation in Parliament on May 4.

While the export of scrap metal will now be prohibited, manufacturing companies that produce their own scrap metal are excused, as long as they can provide sufficient evidence of their production to Customs officials. Smelted metal will not be permitted for export, only metal that is in its original state.

Copper may no longer be exported, and this was made effective yesterday.

Containers at the port before tomorrow will be exported. Other packed and sealed containers will be unpacked and inspected by Customs officials, police officers and stakeholders before being repacked.