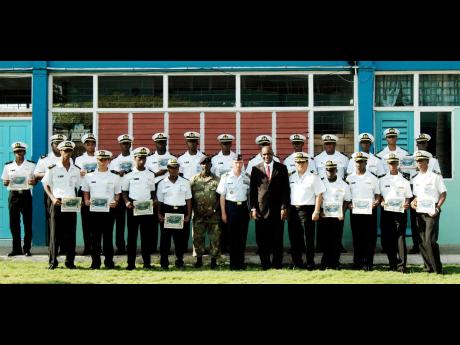 Executives of the Caribbean Maritime Institute (CMI) and the United States Coast Guard, along with CMI cadets, pose after a successful completion of the Tradewinds simulation exercise on April 21.

The simulation involved role playing by the cadets, some of whom were involved in a mass casualty resulting from an aircraft accident, and others acted as rescue personnel conducting triage and first aid.

Captain Michael Christian of the USCG, in addressing the cadets after the simulation exercise, commended them on their excellent role play and noted that their enthusiasm and excitement made the simulation appear real. He expressed his gratitude to executive director of the CMI, Fritz Pinnock and his team for making the cadets available for the exercise.

The United States Southern Command, located in Miami, Florida, is one of 10 unified combatant commands in the Department of Defence. It is responsible for providing contingency planning, operations and security cooperation for Central and South America, the Caribbean (except US commonwealths, territories and possessions), Cuba, as well as for the force protection of US military resources at these locations. SOUTHCOM is also responsible for ensuring the defence of the Panama Canal and canal area.

CMI is the Caribbean's leading maritime training institute and is a statutory organisation within the Ministry of Transport and Works, and in partnership with the Port Authority of Jamaica and the Shipping Association of Jamaica.