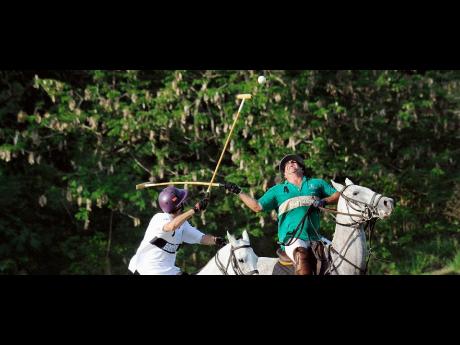 Jonathon Dougall (left) from the White-clad Strawberry Hill team in an aerial tussle for the ball with Mark Melville of the Bin 26 team during Sunday's final of the Scotia Private Client Group Jamaica Open Polo Tournament at the Caymanas Estates. Bin 26 won by 5 goals to 41/2. - Rudolph Brown/Photographer

Rallying strongly in the fourth and final chukka, Bin 26 knocked in three late goals to clip team Strawberry Hill five goals to 41/2 in the final of the Scotia Private Clients Group Jamaica Open Polo Tournament, before an appreciative crowd at the Kingston Polo Club, Caymanas Estates, on Sunday.

The Devon House-based Bin 26 (Wine Bar) looked held when trailing by 21/2 goals at the end of the third chukka. But thanks to two goals from the top-rated Argentinian, Tomas Gandara, and one from Mark Melville, Bin 26 grabbed the lead with a minute to go and held on grimly.

The winning goal came with only 59 seconds left on the clock; Gandara converting a 60-yard penalty - his hard, booming drive going high between the goal, to the delight of his teammates.

Despite going down to the wire, the match was a dull, listless affair for the first two chukkas, marked by missed opportunities, especially from the Bin 26 team. They actually trailed from the first minute when the Argentinian Juan Humbert scored for Strawberry Hill. But as the match progressed, the tempo picked up considerably in the third chukka, Strawberry Hill coming on strongly with Jonathon Dougall and the Argentinians Humbert and Jorge Donovan scoring to lead 41/2 to 2 going into the final chukka.

But polo is such an unpredictable sport that although looking all over the winners, the 'Mitta' Rousseau-led Strawberry Hill were surprised by the late surge of Bin 26, thanks to two goals from the MVP of the final, top-ranked Gandara, a six-goal player.

The winning team was completed by Alexander Melville (captain) and Ricky Wates.

Melville described the victory as a great comeback by Bin 26.

"In the beginning we had a lot of bad luck," he recalled. "The ball wasn't rolling our way, hitting off horses in many instances and we fell behind. But in the end the gods were smiling on us as we came back strongly late in the game for a thrilling victory.

"Everyone played their part and I'm happy," added Melville, who recently returned to the sport following a one-year layoff.

In the subsidiary final between the losing semi-finalists, team Scotia Private Client Group defeated team Pegasus 3 to 21/2 with two goals from the Argentinian José Lartigoyen and one from Ramon Vernon, who scored the goal of the day - a brilliant reverse-flick from 60 yards out.

Mining and Energy Minster James Robertson who captained the team described the goal as sensational.

The Scotia Private Client Trophy was presented to 'Zanda' Melville by Debra Lopez-Spence and Anya Schnoor, top executives of the Scotia Group.