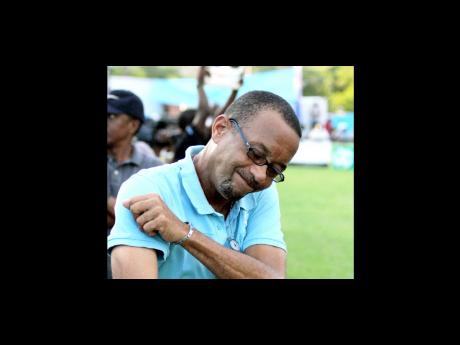 Bell ... we've been playing with a lot more confidence.

It was the first time Portmore were scoring three goals in a league game this season and the three points garnered from the win moved them within touching distance of survival in next season's competition.

"It is an important result," said Portmore United's coach, Neville 'Bertis' Bell. "We have been playing with a lot more confidence and as a matter of fact, in the last seven games we are unbeaten."

"I think we played well. It is the first time since I am at Portmore, and this is my 16th game, that we have scored three goals, so that is a good sign and hopefully, we will continue," he added.

Sporting Central started the game more sprightly and came close to opening the scoring in the 20th minute when André Allen's 25-yards drive beat the goalkeeper, but smashed into the crossbar.

Portmore came into the game as it wore on and found an opening in the 35th minute when a flowing move resulted in three Portmore players being unmarked in the Sporting Central box and Mario Swaby took on the responsibility to score from five yards.

Just as they did in the first half, Sporting started the second in the ascendancy. But Portmore soaked up the pressure and got better as the half went on and soon made it 2-0 in the 65th minute, when Tramaine Stewart made a wonderful dribble down the right flank before crossing at the near post to Carlington Smith, who hammered home.

Sporting pulled a goal back in the 81st minute to set up an interesting finish, when 74th-minute substitute, François Swaby, leapt well to head in from close range.

However, Portmore killed off the game as a contest in the 89th minute when 82nd-minute substitute, Craig Gayle, neatly brought down a long-range pass on his chest in the Sporting box, before beating the out-rushing keeper, André Blake.

"We really wanted three points to stay in the hunt and we are leaving without a point, so we are very disappointed," said Reynolds.

"At the beginning of this round, we figured seven or eight points would have made us safe. We have three more games, so we still have the possibility of getting those seven points, but we didn't want to leave it until the last three games," Reynolds added.