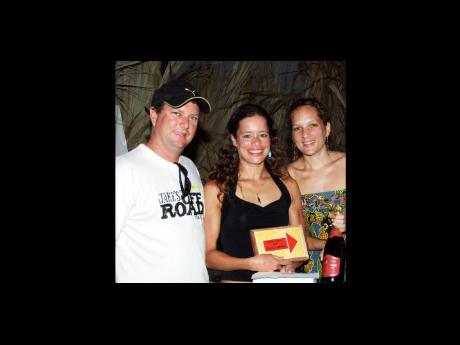 Elizabeth Mondon (centre), shows the winner's plaque presented to her by Jason Henzel (left), co-founder of the Jake's Off Road Triathlon, at its 15th annual staging in Treasure Beach, St Elizabeth, last Saturday. Mondon won the overall individual women's category in one hour, 32:22 minutes. At right is Melissa Eldemire, marketing manager at Island Outpost, one of the event's sponsors. - Photo by Noel Thompson

Kingston resident Patrick Lee and French-born Elizabeth Mondon, won the major awards at the 15th staging of the annual Jake's Off Road Triathlon at Treasure Beach, St Elizabeth, on Saturday.

Lee emerged the winner in the overall individual male category, clocking one hour, 32:48 minutes, while Mondon took the female equivalent in 1:32:22.

The triathlon included swimming, running and cycling along several metres of dirt track through the community.

Over 100 participants from all across Jamaica, as well as overseas, including children 12 years and under, numbered among the scores of sports enthusiasts who battled for top honours in various categories.

The relay categories were won by Clay Parks of Oracabessa, St Mary; and Alexandra Beckford and Andrew Gutsmore, both from Kingston.

Lee, having placed second and third in former years was relieved to finally claim top spot.

"I feel very relieved getting in this position. I compete in triathlon overseas, but you don't get the kind of fulfilment there because you tend to not perform as you would like," said Lee.

Lee returned to the island a week ago after competing in the New Orleans Triathlon, which he describes as very gruelling.

"Triathlon is a growing sport all over the world. It is good that Jamaica has its own and I commend Jake's for staying the course for the past 15 years, making more Jamaicans aware of the sport," Lee added.

Mondon, a coastal engineer who now lives in Jamaica, has won the Jake's Off Road Triathlon twice previously.

"It feels good to win and I hope to win again," she said.

The Jake's Off Road Triathlon was cofounded by businessman Jason Henzel and Peace Corps volunteer Amy Gottleid. They both thought that the Treasure Beach landscape lent itself to people visiting and enjoying it through athletics.

"We thought that a triathlon would be most appropriate," Henzel said.

Meanwhile, the Little Jake's Triathlon, which had recessed for the past five years, returned this season with a bang. Triston Dellisser won in the under-12 category, while Jonathan Goran won in the over-12 segment.