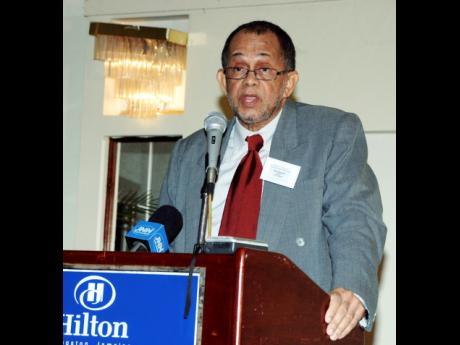 Clovis Metcalfe was promoted to managing director in January 2009. - File

Clovis Metcalfe has only been in the job for 15 months, but he will soon be handing over control of FirstCaribbean International Bank Jamaica Limited and heading into retirement, the bank said.

No successor has yet been identified for Metcalfe, whose departure from the bank was disclosed to the market last Friday. It comes in the midst of changes within the regional banking powerhouse, which has already shuffled leaders in its markets in Barbados and OECS, and Trinidad.

FirstCaribbean group chairman Michael Mansoor said the hunt was on for a new head for the Jamaican operation.

"We are looking for someone and hope to find a replacement by later this year," Mansoor told Wednesday Business. He is also chairman of the Jamaican operation.

The post of managing director and senior coverage officer, Jamaica, is now being advertised on the parent company's website, along with several other posts for its regional offices.

"He (Metcalfe) was to have retired some time ago but we asked him to stay on," added Mansoor. "He has done a wonderful job, served well and will stay a little longer until we sort ourselves out."

But Mansoor's praises notwithstanding, FirstCaribbean Jamaica's performance in the first year under Metcalfe's guidance has registered declines in some areas, according to the most current central bank data on the commercial banking industry.

Jamaica's banking sector has been challenged to maintain ratios and keep loans from going sour since the recession.

FirstCaribbean Jamaica shed J$2.5 billion of assets in the one year period ending December 2009, a decline of 4.6 per cent that was mostly linked to a contraction of the value of its loan portfolio, according to Bank of Jamaica data, whereas the sector reported gains of 4.7 per cent.

Its share of industry assets dropped from 9.7 per cent to 8.8 per cent, whereas the industry grew assets from J$556 billion to J$583 billion; but maintained its standing at No 4 in a sector of seven.

FirstCaribbean's loans fell to J$26.9 billion, from J$29.3 billion at December 2008, against growth for the industry in the order of 3.2 per cent. The only other bank in the sector to have lost value on loans, according to the BOJ industry data, was RBTT Bank Jamaica, whose portfolio declined by almost six per cent, from $36.5 billion at December 2008 to $34.5 billion last year.

Metcalfe, however, returned improved profits in 2009, which grew by more than J$50 million to J$886 million in the period, notwithstanding tripled loan losses of J$449 million.

The banker, who is normally available to the media, chose not to comment for this story.

Wednesday Business was informed by the marketing and communications manager, Stacey Adams, that it was company policy to first communicate with staff members about transitions of this nature before speaking to the media - which up to Tuesday had not been done.

"While Mr Metcalfe is open to interviews he can't do it now," said Adams. "Mr Metcalfe has not had a chance to address staff and needs to do that before going to the media, which is the bank's policy."

Metcalfe was appointed head of the FirstCaribbean Jamaica in January 2009, replacing Milton Brady who was promoted to managing director of corporate investment banking across the Caribbean in November 2008, and headed off to Barbados.

Metcalfe, promoted from within the bank, previously served in positions such as director and head of corporate banking. He has been a banker for 36 years.

In the other changes across the group, Daniel Farmer, previously with Interbolsa Caribbean Mer-chant Holdings Limited, was named Managing Director and Senior Coverage Officer for the Barbados Operating Company in March; and Ian Chinapoo come May 1, will replace Larry Nath as managing director of the Trinidad Operating Company.