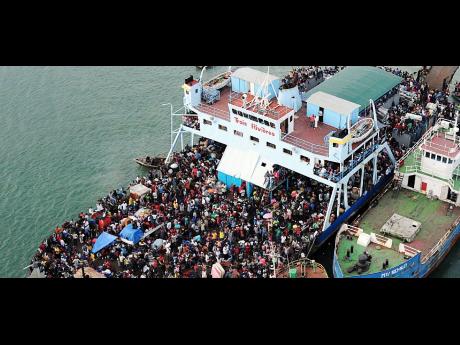 In this January 16 photo, Haitian citizens crowd a ship near Port-au-Prince, Haiti, after earthquake devastation left many homeless, injured and hungry. A United Nations agency has joined donor nations in writing off a portion of Haiti's debt. - File

The United Nations agency tasked with reducing rural poverty has approved a debt-relief package for disaster-stricken Haiti in a bid to help the country get back on its feet after the calamitous earthquake that struck the Caribbean nation on January 12.

"The agreement provides the basis for permanent debt forgive-ness of Haiti's debt burden to our organisation," said Kanayo Nwanze, President of the Interna-tional Fund for Agricultural Development (IFAD).

Nwanze said the net present value of Haiti's debt to IFAD is US$50.7 million.

Under the agreement to write off the debt, the UN said IFAD will contribute up to 30 per cent of the debt relief requirement, with UN member-states needing to contribute the remaining 70 per cent.

"Without this type of relief, Haiti would have been hard pressed to repay its outstanding loans to the organisation, to the detriment of the critical reconstruction and development activities," Nwanze said.

"With the generous contributions from our members - plus a significant investment on our part - we are breaking that cycle," he added.

IFAD said it responded 'rapidly' to the January earthquake with a US$2.5 million grant for irrigation and watershed rehabilitation in a project that is expected to benefit about 12,000 households in rural areas directly affected by the earthquake.

"A small portion of Haiti's debt was already forgiven by organisations, like IFAD, under the Highly Indebted Poor Countries Debt Initiative, but the bulk remained," said Josefina Stubbs, director of IFAD's Latin America and the Caribbean division.

"By relieving the country of this burden, we are freeing up funds for redevelopment and recon-struction," he added.

IFAD is an international financial institution and a specialised UN agency dedicated to eradicating poverty and hunger in rural areas of developing countries.

In late March, the World Bank announced that US$479 million will be available to support Haiti's recovery and development through June next year, including the total cancellation of the remaining World Bank debt.

The bank also confirmed that it will be responsible for the fiscal management of the multi-donor Haitian Reconstruction Fund.

Of the total US$479 million, US$250 million is new funding, it said, adding that it includes US$151 million in grants, a US$39 million write-off from cancelling Haiti's remaining debt to the bank and US$60 million in investments from the bank's private-sector arm, the International Finance Corporation.

"This is a chance to do things differently. We can create a better future for Haiti, but we need long-term commitment and a new partnership," said World Bank President Robert Zoellick.

"The quick and generous efforts of these 14 donors have freed us to focus fully on supporting Haiti's reconstruction needs," Zoellick said.

Dozens of nations and organisations also last month pledged almost US$10 billion in immediate and long-term aid to help Haiti recover from the catastrophic earthquake.

The UN said, of that amount, more than US$5 billion was pledged for the next 18 months, well above the US$3.9 billion sought for the period.

The January quake that struck close to the capital, Port-au-Prince, killed an estimated 300,000 people and left about 1.3 million of Haiti's nine million people homeless.