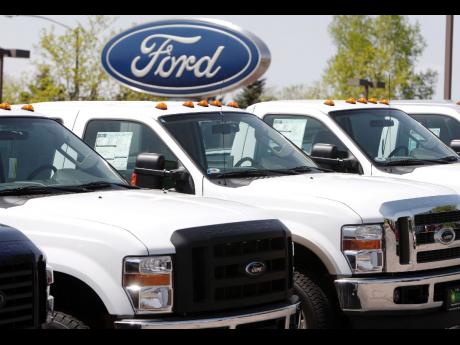 Ford earned $2.1 billion in the first quarter and forecast a solidly profitable year as consumers spent more on big-ticket items like cars.

But investors weren't as confident, pushing down Ford shares after the automaker reported results on Tuesday. They worried that the company can't sustain its strong gains in the second half of the year as it could face higher commodity prices, rising interest rates and weaker European demand.

Gimme Credit analyst Shelly Lombard said Wall Street is worried that Ford relied heavily on profits from its finance division, which are expected to dip later this year, she said. Ford also saw huge United States market share gains in the first quarter that are unlikely to keep growing at such a pace. And Ford is expecting the cost of steel and other raw materials to rise as the economy improves, which will cut into profits.

"I wouldn't say it's a mirage. I think it's real. But the amount of progress they've made may not be sustainable," Lombard said.

Ford reported that net income per share was 50 cents for the quarter. That's an about-face from the same period last year when it lost US$1.4 billion, or 60 cents per share, at the height of the recession. It was Ford's fourth straight positive quarter and its highest quarterly profit in six years.

Ford Chief Financial Officer Lewis Booth said the company's quarterly performance might not be duplicated later in the year. He said Ford's credit unit had a particularly strong performance, with a net profit of US$528 million, and would likely see lower revenues later in the year.

But he said Ford would be more profitable for the year than it was at the end of the first quarter.

Ford Credit is expected to contribute US$2 billion to the bottom line, up from a forecast of US$1.5 billion in January.

The auto company's shares fell 70 cents, or nearly five per cent, to US$13.76 in afternoon trading.

Ford's first-quarter revenue rose 15 per cent to US$28.1 billion. Analysts polled by Thomson Reuters had expected US$30.5 billion.

Booth said revenues would have been higher but the company excluded US$3.5 billion in income from Volvo, which it is selling to Chinese automaker Geely Holding Group at the end of March. That sale will officially close in the third quarter.

Ford has gradually cut costs and improved sales since the depths of the recession a year ago. The automaker made US$2.7 billion last year, but the company remains saddled with significant debt.

Ford said its debt increased by US$700 million to US$34.3 billion in the quarter.

"While we are pleased with our results, we do not underestimate the challenges ahead," Ford President and CEO Alan Mulally said.

Ford paid off US$3 billion in debt at the beginning of this month.