A marvellous 'Konversation' at Jazz in the Gardens 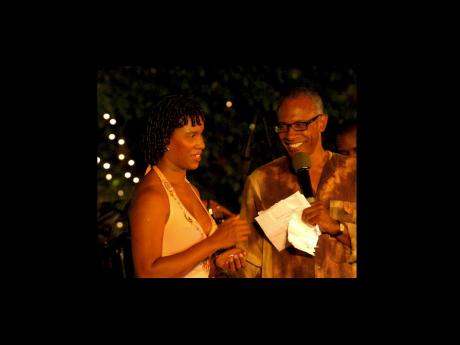 MC Michael Cuff introduces Kathy Brown to the audience at Jazz in the Gardens, held at The Jamaica Pegasus Hotel, New Kingston on Sunday. - Photos by Winston Sill/Freelance Photographer 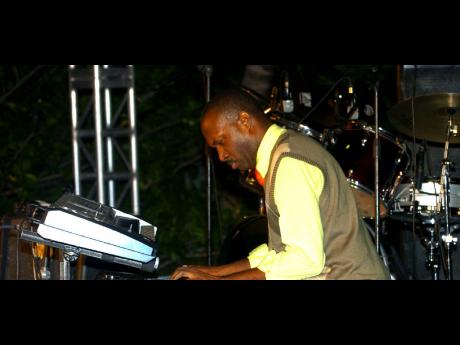 Dennis Rushton playing the keyboard at Jazz in the Gardens. 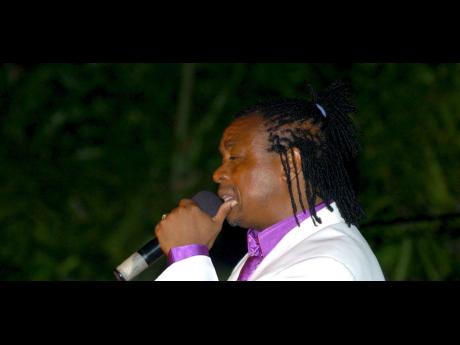 If music be the food of life, then the capacity-sized audience which attended Jazz in the Gardens at The Jamaica Pegasus hotel on Sunday were treated to the finest cuisine and served by some of Jamaica's best - Harold Davis, O'Zoune, Jon Williams, Kathy Brown, Christopher McDonald, Andra'e Campbell, Dennis Rushton and Othneil Lewis.

Also dubbed 'Ivories in Konversation 2', the show was a display of passion, fun, style, creativity and skill, as ivories (keyboard) conversed through fingers with bass guitar, percussion drum set, violin, saxophone and vocals.

After some fine selections by Gladdy of Wild Bunch Disco and a welcome by MC Michael Cuff, the conversation with ivories began. First was McDonald. He gave a creditable performance, using both vocals and keyboard. Lewis followed; he played Drum Song and his original God's Speed from his heart. Later Kathy Brown, the lone female act on the programme, was good in her jazz flavouring of the Jamaican folk song Sly Mongoose, and Davis was wonderful, also on keyboard, with I Shot the Sheriff.

Williams was a show of musical skill. With accompaniment from Desi Jones on drum and Dale Haslam on bass, he began his act with a jazz fusion of Bob Marley's Natural Mystic. And as the aroma of coffee mixed with the cool evening breeze, he switched to the keyboard for Blue Bossa, for yet again another captivating performance.

But the most entertaining act of the evening came from Rushton. Performing like a man possessed by the god of music (if there is one), he gave the audience a treat of the finest wine and more. His entrance through the audience playing an accord was the first sign of his intentions. And when he switched to keyboard to play Sound of Music, he was hilarious. Rushton used his mouth, his feet, his elbow and his forehead to produce some beautiful notes. Davis later best described what earlier occurred, saying, "I heard that the only part of his body that Dennis did not use to play was ... ".

O'Zoune began his act in a very unorthodox way: by singing an un-arranged song that he explained "comes from feeling". (The song was an opening prayer of thanks).

His first song, Days of Wine and Roses, was played on a pianica. Like Rushton, O'Zoune was very animated in his performance, producing laughter from the audience. Campbell too gave a delightful jazz treatment to the gospel song What a Friend We Have in Jesus.

The ever dapper A.J. Brown was the only vocalist on the programme. He, too, was magnificent and engaging. His selections included his popular You Captured Me Without a Fight.

In the final act, all nine performers took the stage. And what a performance it was. Imagine a stage with six keyboards, a drum set and a bass guitar playing jazz, while the decorated coconut trees in the background nod to each beat and the audience sit transfixed. And fittingly, one of the songs being played (and sang) was the folk song Evening Time.

Among those who remained until the last note was played was Ronald Meikle from Las Vegas.

"They are excellent; they would be among the best if they performed in Las Vegas," said Meikle.

Jazz in the Gardens is the brainchild of The Jamaica Pegasus' general manager Nancy McLean. She explained that the concept was as a result of the hotel having a wonderful garden and a small musical band. With the help of other artistes, the first Jazz in the Gardens was staged. And after the first year, the event has grown to a series of six shows per year, with the sixth being the best of the year. The next show will be on June 27 and titled Generation Next.