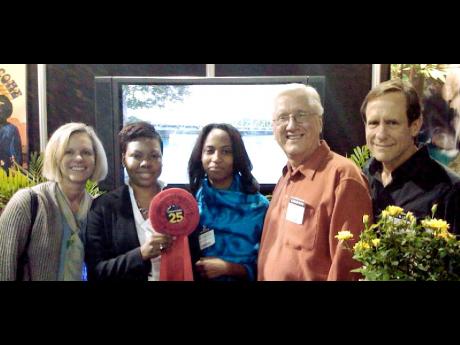 The Jamaica Film Commission's creativity and distinctive flair in marketing the island as an attractive film location was celebrated recently with the runner-up award for Best Theme Booth at the Association of Film Commissioners International (AFCI) Locations Trade Show, which was held at the Santa Monica Civic Auditorium in Los Angeles, California, from April 15 to 17.

Representatives of the AFCI Marketing and Booth Awards, a global competition encouraging film commissions to put forth winning components of their marketing and advertising campaigns, presented the accolade to Gillian McDaniel, senior consulting officer in the Creative Industries Unit at Jamaica Promotions Corporation (JAMPRO), and Nardia McKenzie, senior consulting officer in JAMPRO's North American Office (Canada). The Jamaica Film Commission, which is housed within the Creative Industries Unit at JAMPRO, finished behind Film The West, which represents Wyoming, Idaho, Montana and South Dakota in the United States, while the Peru Film Commission finished third.

Utilising the theme 'A Filmmaker's Paradise', the Jamaica booth featured stunning large-format images of Somerset Falls and Boston Bay by photographer Christanya Julien, as well as images depicting the fabled Port Royal, Hanover Parish Church and Blue Cave Castle in Negril. The booth's visual display was anchored by a large poster of the landmark film The Harder They Come, which was directed by Jamaican film legend Perry Henzell. The poster generated quite a buzz among the Hollywood crowd at the event and follows up on the recent industry focus on Henzell, who was honoured by American Cinematheque last month.

An independent judging panel of professional marketers and entertainment-industry experts selected the winners for the AFCI Marketing and Booth Awards. A total of 48 exhibitors (from a field of more than 240) from 30 countries received awards in 16 categories.

"For 15 years, the AFCI Marketing and Booth Awards have recognised the creativity of our members," said Larry Brownell, CEO of the AFCI, in a press statement. "As today's global economy presents the entertainment industry with new challenges, it has become increasingly important to develop marketing and advertising campaigns that inspire filmmakers, capture audiences and span cultural divides."

In addition to the recognition earned at the expo, the Film Commission succeeded in attracting serious interest from several filmmakers, who were particularly impressed by the island's jungle terrain. JAMPRO said its officials are currently pursuing these leads with a view to converting them into major projects.

The film commission's previous participation in the expo resulted in the landing of the film License to Wed, which was shot for 10 weeks in Ocho Rios and pumped US$3 million into the local economy.