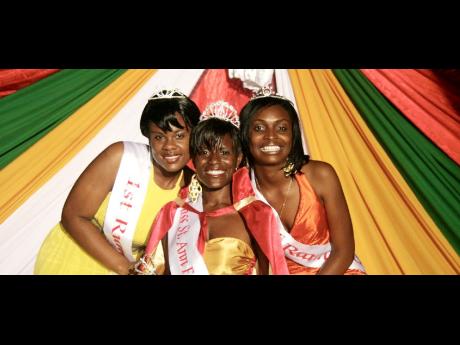 Last Saturday, the second time around proved to be a charm for 24-year-old Davia Wilson, a student at the University of Technology. Wilson beat six other contestants to take the Miss St Ann Festival Queen title at the parish's coronation show held at Sand Castles Resort in Ocho Rios.

In the talent segment, Wilson's performance evoked laughter from the audience as she delivered an original dramatic piece titled Jamaica Needs Jesus. However, 22-year-old Sasha-Gay Benjamen, a sales representative, dominated the talent section with a dance composition titled Ole Time Sinting, which earned her the COK Best Performer trophy. Benjamen was also named the Most Congenial contestant.

In the evening-wear parade, Wilson appeared in a scarlet and gold gown and was serenaded along with the other contestants by saxophonist Xavier Wilson from

During the onstage interview, 24-year-old nursing student Micaela Lunan told the audience about her plans to help disabled children in the parish and took the coveted Springtime Most Culturally Aware trophy. Wilson's response was also greeted with approval as she spoke to the positive impact dancehall artistes could have on society.

Wilson will go on to represent the parish at the Miss Jamaica Festival Queen show on July 17.