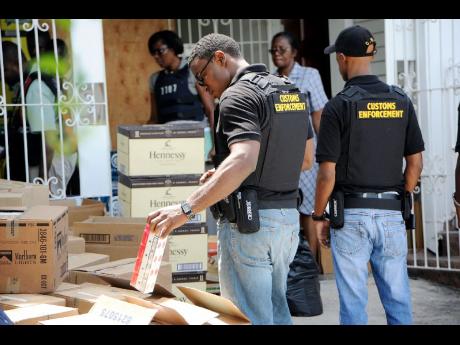 Customs enforcement agents search through $25m worth of cash, cigarettes and other items seized from a house on Shenstone Drive in Beverly Hills, St Andrew, yesterday. 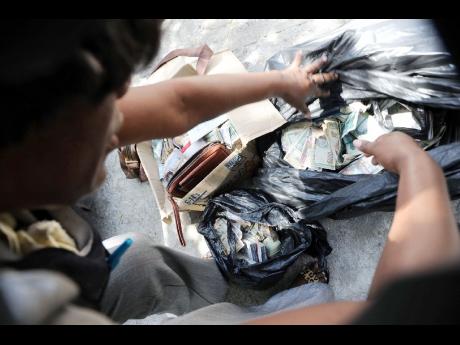 Millions of dollars in Jamaican, United States, British and Canadian currency were taken from the house located at 9 Shenstone Drive, along with a large quantity of counterfeit cigarettes and other illegally imported goods. Three motor vehicles were also seized.

Customs said more than 400,000 sticks of assorted smuggled and counterfeit cigarettes of varying brands, valued at $12.9 million, were seized in the operation.

"Cash in varying currencies in excess of $12 million and assorted alcohol beverages valued at $1.8 million, as well as counterfeit batteries and other miscellaneous items, were also seized," Customs said.

Three persons have been arrested in connection with the seizure.

Head of OCID, Superintendent Fitz Bailey, said the joint operation formed part of continuing investigations into the trade in counterfeit cigarettes and other illegal goods.

"During our search, we identified a significant amount of cigarettes - several brands, alcohol and other counterfeit goods," he said.

Bailey said as the police continue their investigations they are expecting to make more arrests.

Since last week, Bailey said the police have raided more than 30 premises and business places in connection with counterfeit goods.

Commissioner of Customs Danville Walker said the Government continues to lose a significant sum from duties and taxes as a result of the illegal activity.

He said, however, that the recent increase in operations against the illegal traders has been bearing fruit.