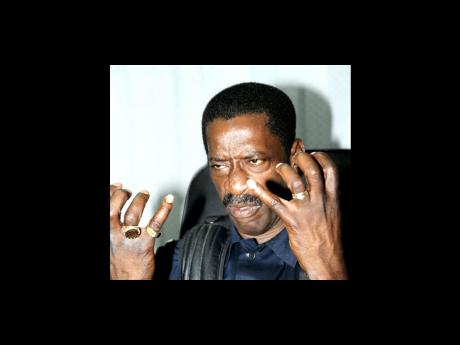 Superintendent Radcliffe Lewis said he is intent on driving extortionists, lawless conductors and 'back-up' men out of business.- Photos by Norman Grindley/Chief Photographer 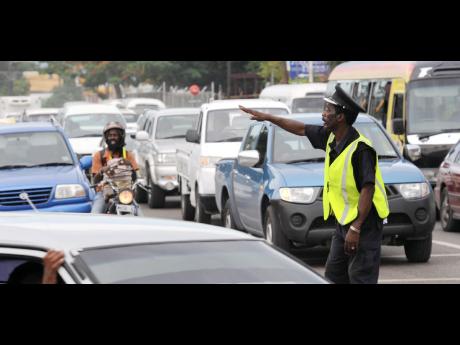 Superintendent Radcliffe Lewis directs traffic at the intersection of Cargill Avenue and Half-Way Tree Road in St Andrew in October 2009. Lewis, who hails from St Elizabeth, said his appointment as head of the Traffic Division is a departure from his previous role as commander of the Clarendon police.
1
2

There's one thing certain about police Superintendent Radcliffe Lewis - if you're within earshot of him, a sound bite is never far away.

Lewis, who heads the constabulary's Traffic Division, is as widely known for his no-nonsense bravado in street-cop mode as for zany comments that would give a PR executive a coronary. Lewis rarely makes himself slave to any script and his liberal tongue has even got him into clashes with officials at the National Works Agency (NWA) with whom he hasn't exhibited shyness for a vigorous tango.

The veteran policeman, who often breaks into Jamaican Patois ("you haffi mek it all-inclusive, everybody you come 'cross, you lick dem down (prosecute them)," he snarls over the phone), doesn't front the smooth-talking sophistication of a cocktail-circuit cop. What you see is inevitably what you get.

The NWA found that out when the traffic chief decided that the right-turn restriction at Kings Way - across from Andrews Memorial Hospital - in St Andrew was more a hindrance than help to motorists. The bottleneck that results from the no-right turn rule spurred Lewis into action. He sought to drain the sludge of blaring horns and smoking mufflers from Hope Road through the corridor to destinations as far away as Portmore and Clarendon.

"Dem say no right turn. Foolishness! You know what I do? In the evening, I make sure detail a man or I go out there myself. I direct the traffic on to Kings Way.

"... There is a sign they put up, with no time limit, and I go there and tear it down and throw it over Devon House. And the following two days after, another sign saying (no right turn) 7 a.m.-7 p.m. was put up. And that is a fool-fool sign too. I went there again to tear it down, but it went down so deep in the earth, I couldn't manage it," he said, laughing, while informing The Gleaner last Thursday that he was on a campaign for the installation of a filter light at the intersection.

Lewis also has a propensity for being hands-on - literally - as when he was recently caught by a CVM TV cameraman leaping into a parked bus that impeded traffic, driving it out of the way, and then hopping out and apparently scolding a junior cop for not taking control. Dubbed "hyperactive" by his superiors - a label Lewis wears with pride - his unconventional, confrontational style has come to the fore in his vaunted crackdown on disorder among bus and taxi operators.

Vowing to clean up the system, the superintendent said there have been more than 3,000 arrests of conductors, 'back-up' men and extortionists - for various offences under the Road Traffic, Transport Authority and Towns and Communities acts - since he took charge last August. Between April 14 and 22 this year, 124 such men had been arrested, the superintendent revealed.

Lewis said his division was determined to arrest and rearrest bus crews who flouted the law and to make sure their pockets suffer.

There is some criticism within Lewis' ranks that his traffic strategy is one-dimensional and off the mark, a monotonous targeting of bus operators.

"You might find that as a police officer, you doing Transport Authority duties. ... You find yourself at one location doing what another agency should be doing," a traffic constable, who requested that his name not be published because of concerns about reprimand, told The Gleaner last night.

As traffic czar, Lewis isn't afraid to toot his own horn. He said the police personnel in his division have worked hard to clear Half-Way Tree Square of buses which once abandoned the lay-by and choked the four-lane corridor, and police are assigned at the town clock to keep a watch on traffic. According to him, "99 per cent" of the windows of buses in the Corporate Area have been stripped of pitch-black tints which were blamed for facilitating sexual or other improper conduct, especially among teenage students.

He also credited the 29 per cent decline in traffic fatalities, up to mid-April, to increased vigilance by the division, and said rogue police personnel - like an unnamed superintendent who was served a summons for traffic violations last Tuesday - were not untouchable.

But Lewis' upbeat assessment of his stewardship carries demerits. Buses still play deafening music along routes. Unkempt bus crews mistreat passengers. Buses, including those owned by the state-run Jamaica Urban Transit Company, divert from established routes on to community roadways in a bid to cut out traffic. And back-up men, or loaders, extort funds in broad daylight from bus conductors, especially at the Cross Roads stop, just 100 metres from the police station.

"They refuse to come forward," he told The Gleaner.

The superintendent said his division had been recently bolstered by the addition of 51 personnel, which means 131 cops are specifically assigned to oversee traffic. Though Lewis is the traffic chief for the island, other police personnel are assigned by their local superiors for road duties. He said he isn't daunted by perceived resource shortages.

"I am one superintendent never, never quarrel about resources. In any organisation, resource is always a problem. What you must do is try to eliminate waste, because most time when people talk about not having enough resources, a waste.

Despite the odds, Lewis said he wants to leave a legacy of a smoothly-run public transportation system "and a chaos-, mayhem- and a traffic jam-free Corporate Area and by extension, the entire island".

Time will judge if Superintendent Radcliffe Lewis has big teeth or just a big mouth.

'I am of the opinion that it (the speed limit) should be less, about 40 or 30km/h, because our society is different from other societies of the world. If we give you an inch, you take a yard. And if you ever bring up that 50km to maybe 70 or 80, they going to drive at 200km/h. These things are done to control us, the Jamaicans, because we are uncontrollable.

One t'ing I regret. I regret working so hard because I allow the work to take precedence over my family and my friends. .... When I am at work, I am a serious man. Work is just work.

If I go home and dream that a man here is corrupted, I call him and tell him that I dream it, and he must explain. That is how serious I am with corruption. Once your name is called and I have the evidence, you will be arrested or you will no longer be a part of this place.