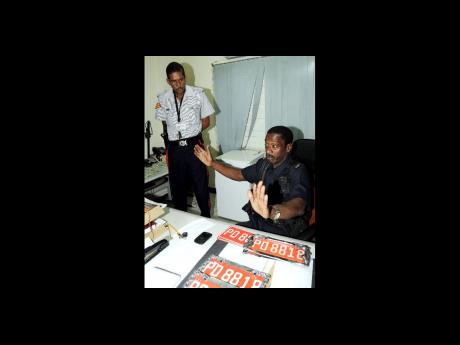 Supt Radcliffe Lewis says the cloning of licence plates, such as those displayed on his desk, is linked to extortion in the Corporate Area. Corporal Donovan Morgan (in background) is leading the Traffic Division's probe into the racket. - Norman Grindley/Chief Photographer

Traffic cops have widened their mandate beyond the monotony of issuing tickets for vehicular violations to tougher crime-fighting responsibilities as the force tries to calm a tempestuous wave of lawlessness in Jamaican society.

Head of the Police Traffic Division, Superintendent Radcliffe Lewis, told The Gleaner last Thursday that the stereotype of 'documents police' was a thing of the past. He said his department was committed to the Constabulary's recently announced plan to beef up manpower on the streets.

"The new thrust now is traffic enforcement and anti-crime. It usually be where the traffic police went somewhere, his only business was documents," said Lewis at his Elletson Road base in downtown Kingston.

Lewis said nothing was off limits for his divisional personnel. Smugglers of drugs and guns, as well as extortionists, would feel the heat, he warned.

The enforcement drive has already begun to bear fruit. A licence plate racket was uncovered more than two weeks ago. Last Thursday, fake plates with the same numbers that surfaced in the first operation were seized.

The superintendent said initial investigations have linked cloning - the production of multiple licence plates with similar numbers - to the extortion underworld, which he claims has made sections of north-central St Andrew its stomping ground.

Lewis said operators of illegal taxis, commonly referred to as robots, receive protection - in the form of fake licence plates - from the extortionists, who exact tribute in return from the cab drivers.

"When they are driving - you know they drive recklessly along Red Hills Road - if you chase them and try to apprehend them, they run straight into 100 Lane, Blacks Ant Lane, and Park Avenue, and when you go inside there, they are well known, because they are part of the whole extortionist racket that is being run in the Red Hills (Road) area, that is business places and taxi operators.

"So they run straight in there for covering from the hoodlums living in those areas, and sometimes when you go inside there, they block the road behind you," said Lewis.

The traffic chief explained that the phantom plates, which can reportedly be sourced for about $5,000, were making the job of flushing out criminals even more difficult. When the cops follow the addresses, they are usually led to a dead end.

"When they are involved in their criminalities, it don't make sense look for them, 'cause you can't find dem," said Lewis.

The allied problem of fake driver's licences, which can be procured for $6,000, also makes many lawbreakers untraceable.

"It (fake driver's licence) is prevalent, based on the amount that is turning up, and based on the number of persons that are being arrested. We are of the opinion that it is widespread," said Lewis, after showing The Gleaner more than a dozen such bogus licences.

"They fool the insurance company, they fool everybody, all the bank," he added.