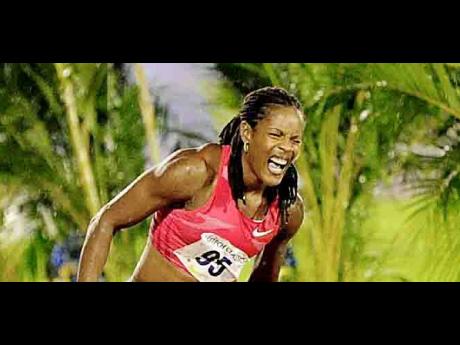 The MVP Track Club leadership is still trying to determine the lay-off period for World 100m hurdles champion, Brigitte Foster-Hylton, after the athlete's recent hamstring setback, suffered at the University of Technology's Track and Field Classic, at the National Stadium two weeks ago.

Club president Bruce James and head coach Stephen Francis were scheduled for talks later yesterday about the extent of the injuries suffered by the endearing athlete.

Foster-Hylton suffered considerable damage to her left hamstring as she battled clubmate Sherone Simpson in the 100 metres at the meet. Foster-Hylton, who was locked in a dead-heat with Simpson close to the 70-metre mark, clutched her left leg before falling heavily to the rain-drenched track.

James described the situation as a possible blessing in disguise, citing an opportunity for the athlete to get some rest ahead of a busy 2011, which will feature the IAAF World Championship in athletics in Daegu, South Korea.

"I am meeting with coach Stephen Francis to discuss that specific matter and his views on how long he thinks she will be out of action for," said James. "We will have to monitor the situation on a day-by-day basis and watch her progress. Every athlete reacts differently to injuries and so we will just have to wait and see how well she does during her rehabilitation.

"But this is a potential blessing in disguise. This is an opportunity for Brigitte to get some rest and it's possibly great for her to be getting some rest and it will allow her to recover some of the stresses her body may have suffered," James added.

"She (Foster-Hylton) may not race for this season but could be back training before then, so any reference to being out for the year would have meant this season and not a calendar year. I do not believe that we are looking at one calendar year of inactivity for Brigitte though," said James.

In an earlier interview with The Gleaner, Foster-Hylton remained resilient and underlined her intention to work on her recovery and return to the track.

"I had a similar surgery done on my right hamstring two years ago before the Beijing Olympics and I did fairly well there. Last year, it was back to full strength and I had a super year," said a defiant Foster-Hylton. "I'm confident that I will recover and be back to top form. Recovery will be easier this time around because we dealt with it early."