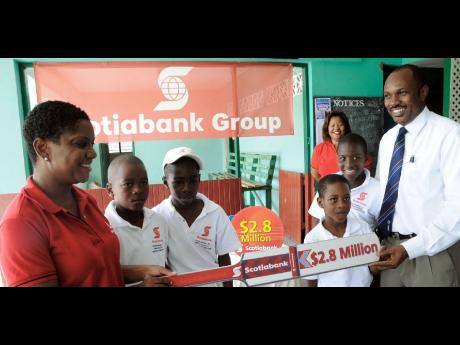 Joan Forrest-Henry (left), director, marketing services, Scotiabank Jamaica, presents a cheque in the form of a bat valued at $2.8 million to Paul Campbell, president of the Jamaica Cricket Association. Looking on (from left) are Raewin Senior and Malik Dooley of Hydel Prep along with Gavin Bonner and Jason Cunningham of Glowell Prep. In the background is Jackie Hamilton, manager, promotions and sponsorship, Scotiabank, at the launch of the Scotiabank-sponsored Prep schools' cricket competition at the Melbourne Cricket Club yesterday. - Ricardo Makyn/Staff Photographer

The championship, which is being staged for the eighth time, will be sponsored to the tune of $2.8 million by the local financial firm, the same as last year.

It is the third straight year that Scotiabank, who are also regional sponsors of West Indies Kiddies Cricket, is sponsoring the championship.

"Three years ago we were approached and decided to sponsor the JCA-organised prep school cricket programme. Since then we have been pleased," said Scotiabank's director of marketing services, Joan Forrest-Henry, at a press briefing held yesterday at Melbourne Oval.

"We like the age group that the competition targets as we believe this is the age group from which future Jamaica and West Indies talent can be identified and nurtured," she added.

The championship, which bowled off on April 20, is comprised of 48 teams, the same as last year, with Monymusk Prep the all-island defending champions.

"It's good to know that Scotiabank is fully committed to the development of the game. We are extremely grateful for their contribution and continued confidence in the JCA's development programmes," said JCA president, Paul Campbell.

The championship, which will see two new schools - Glowell Prep from Portmore, St Catherine, and Richmond Park Prep from the Corporate Area - participating, will be contested in the regions of Cornwall, Middlesex and Surrey.

The regional winners will then advance to the all-island play-off, which is set for June 17.

Matches will be played on a 25 overs per team basis, with a minimum of 10 overs each constituting a match.