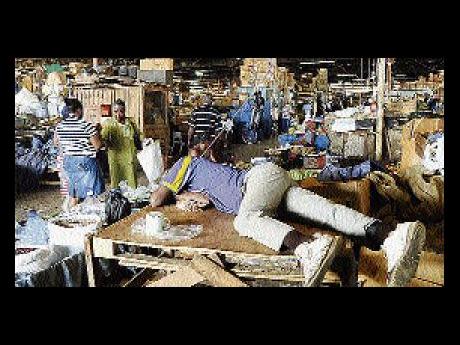 A man sleeps on a stall in Coronation Market on Monday. Digicel is planning to invest in major renovation of Coronation, which is Jamaica's main market. - Ricardo Makyn/Staff Photographer

The local arm of international mobile giant Digicel Jamaica has embarked on a multimillion-dollar plan to refurbish the Coronation Market.

Colm Delves, Digicel Group chief executive officer, confirmed to The Gleaner that a massive undertaking to restore glory to the historic landmark has begun, but said it was in the preliminary stages.

"We are going through various aspects of the plans at this time, but we anticipate that we will start this year," Delves told the Gleaner.

Delves said, however, that a concrete dollar figure has not been finalised.

"We see Coronation Market as the focal point of trade in the downtown area. At the same time, we recognise that the facilities there need to be improved," he added.

Delves said talks with the Government were well advanced.

Kingston Mayor Desmond McKenzie, who represents the Tivoli Gardens division in which the market is located, described Digicel's intervention as timely.

"It is a welcome decision by Digicel, when one takes into consideration the financial constraints being experienced by the country and the fact that Coronation represents the breadbasket of the country in terms of ground provisions," McKenzie said.

Noting that Coronation was Jamaica's largest public market, McKenzie said Digicel's plan coincided with the Government's mission to revitalise downtown Kingston. The Government is also in the process of completing the finishing touches on a transport centre in the area.

McKenzie said a technical team from the Kingston and St Andrew Corporation (KSAC) recently toured Coronation for a first-hand observation of the state of the market.

"We are seeking to ensure that they get value for money, which will leave a lasting impression on the market and community," the mayor said.

The Government had announced, two years ago, that it would be push through "critical repairs" to Coronation Market. McKenzie said in August 2008 that the first phase of a $30-million rehabilitation programme was to be carried out by the KSAC and the Urban Development Corporation that month.

But the refurbishing programme failed to get off the ground because of financial challenges.

Known for its frenetic activity, Coronation showcases a gamut of ground provisions and other items. It is located in West Kingston, the constituency of Prime Minister Bruce Golding.

Meanwhile, Delves disclosed that the telecoms company's plans to relocate its headquarters from New Kingston to downtown were proceeding smoothly.

"We have purchased the lands and now we are talking to the developers," he said.