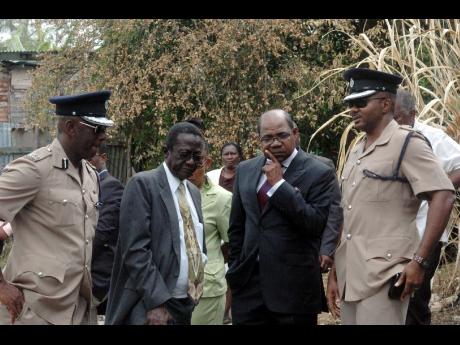 In response to Sunday's carnage in which five persons were murdered in Salt Spring, St James, National Security Minister Dwight Nelson has announced that a permanent police/military post is to be established in the nearby Montego Hills community.

"There are two things we are going to be doing … . We have acquired a house which will be used to house a contingent of police and soldiers," said Nelson, following a tour of Salt Spring with Member of Parliament Edmund Bartlett and members of the Area One Police High Command.

"Because this place (the house) is within five minutes of the communities in this area, it will be easy for the police to move from here and get into the communities."

Nelson, who lamented the challenges posed to policing the terrain in and around Salt Spring, said his ministry was looking at what he considers an appropriate solution to the problem.

"We are planning to have a major increase of about 40 police personnel in the next few weeks, so that the contingent in the parish will be very strong," noted Nelson.

Assistant Commissioner of Police Denver Frater, officer with responsibility for Area One (Trelawny, St James, Hanover and Westmoreland), welcomed Nelson's announcement, and noted that it would bring renewed hope to the community and the police.

"I am satisfied that there are a lot of hard-working, disciplined and committed people in these areas, so with the establishment of this facility, we are sure we will be able to partner in the whole management of crime," said Frater.

"The entire command at both the area and divisional levels welcome this idea."

Bartlett noted that while measures such as intervention by the Peace Management Initiative and other soft initiatives were welcomed, tough measures would have to be put in place.

"There are hard initiatives that have to follow because we are determined to ensure that Montego Bay comes back to what it was - the friendly city," said Bartlett, who is also the minister of tourism.

"This is the largest tourism centre in the Caribbean and, as much as the issues are not on the coast, it is not satisfying to us because Montego Bay cannot be carrying headlines of murder and mayhem."