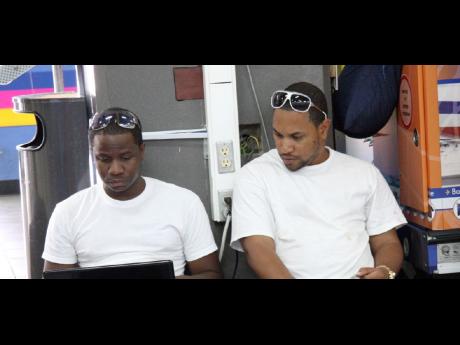 Dwayne Hylton (left) and Johnathan Campbell, Jamaicans residing in Fort Lauderdale, Florida, pass time surfing on a laptop inside the Sangster International Airport in Montego Bay, St James, after an Air Jamaica flight to Fort Lauderdale was cancelled. They were among several passengers on that flight who were inconvenienced. - Photo by Noel Thompson

Several Air Jamaica passengers are threatening to file lawsuits against the airline and the Government if they lose their jobs in the United States after the cancellation of flights because of yesterday's strike action by employees.

The disgruntled passengers, who are Jamaicans residing in Fort Lauderdale, were among scores of frustrated travellers who were scheduled to depart from the Sangster International Airport in Montego Bay, St James, to Fort Lauderdale, Florida.

"I have to go to work on Friday. If I don't, I will lose my job, and if that happens, I swear to God I'm going to sue Air Jamaica," said Ionie Parchment.

"I have to report for duty at 7 a.m. Thursday, and if I don't, I could lose my job, because I have exhausted all my free days."

The Air Jamaica flight was scheduled to depart at 12:35 p.m., but shortly before 1 p.m. they were informed that the flight had been cancelled. This was apparently pending the outcome of a crucial meeting between the Government and union representatives over the sale of the national carrier to Trinidad-owned Caribbean Airlines.

For most of the morning, the Air Jamaica counters appeared to be undermanned as passengers reported being at the airport for up to two and a half hours before being attended to.

"I have been here since 10:26 a.m. for my 12:35 flight. The lines were moving very slowly and staff asked for our cooperation, as they were awaiting the outcome of a meeting between their union and the Government," Dean Duggan told The Gleaner.

Said Duggan: "They told us no flight would be leaving and they could not say what would happen for Thursday."

By around 1 p.m., operations at the airports had returned to normal.