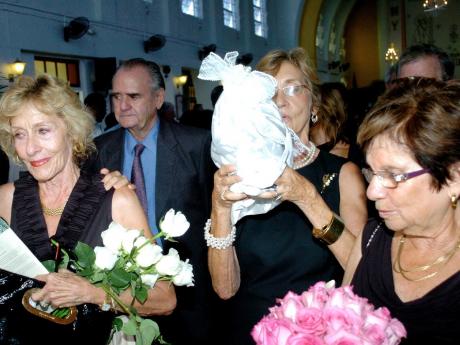 Rosemarie McIver (second right) holds an urn with the remains of her mother, Edith Desnoes, while her sisters Sheila Hart (left) and Joan McConnell look on during the service of thanksgiving held at Sts Peter and Paul Church, Old Hope Road, yesterday. - Winston Sill/Freelance Photographer

Fond memories, admiration and love flooded the Sts Peter and Paul Church yesterday as family, friends and well-wishers paid tribute to the life of Edith Desnoes.

Kind, fearless and immaculate were only a few words rolling off the tongues of family members who took time out to remember her.

An emotional Wendy Hart, in giving tribute, said her grandmother was a tower of strength for her family as she strived to get the best out of her children and grandchildren.

"Her kindness and hospitality stood out," she said. "She was never shy to express her views and to enter a debate."

In remembering her grandmother, she said Desnoes placed tremendous interest on reading, especially information about the Jamaica Stock Exchange.

"When my mother told me that my grandmother stopped reading at the age of 96, I knew it was only because she wasn't getting the right things to read so I took some … (financial books) and she read them from cover to cover," she disclosed.

Another granddaughter, Sharon Feanny, described Desnoes as a legend.

"She lived an ordinary life but she was an extraordinary woman. She had a no-nonsense exterior with a fearless and loving inside," she said.

"She was strict, tough but wise, as she was a doer and an achiever," Feanny added.

"Faithfulness is one of the most important things in life but it is a hard thing to do and one which is costly, and Edith was faithful," he noted.

He said she was dedicated to the church, evidenced by her giving her children a religious education background, and there was no doubt that she had completed her work on Earth.

Among those in attendance at the service of thanksgiving for Desnoes were politicians and several diplomats.