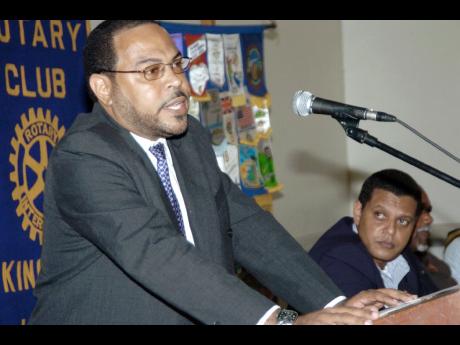 THE NAMING of Joseph M. Matalon and Opposition Leader Portia Simpson Miller in a motion filed by Attorney General Dorothy Lightbourne, for a declaration by the court on her authority and powers in matters relating to extradition, has triggered debate on whether these two defendants' rights to freedom of expression were breached.

Matalon, president of the Private Sector Organi-sation of Jamaica (PSOJ), and Simpson Miller were named as defendants because of their public utterances purportedly questioning the right or authority of the minister to decline the extradition request for Tivoli Gardens strongman Christopher 'Dudus' Coke. Lightbourne has also named Coke as a defendant.

"It appears to me rather odd that it could be consistent with the right to freedom of expression and to express an opinion, if just to do that could cause one to end up as a defendant to an application in court," Batts said.

The attorney argued that persons might be reluctant to make public utterances in future because of this development.

"Anybody thinking of making a public comment in the future may want to think twice about it, given the fact that there is this potential to be exposed to legal action. You are not saying anything defamatory, you are giving an opinion on a matter that is up for public discussion," he said.

Bert Samuels, attorney-at-law, told The Gleaner that one of the rationales for a person being a party to court proceedings was that he had an interest in the matter.

"When you pull me in as a defendant, because I did not ask you to join me, I incur legal costs, so there are two sides to the story. There is the question of the person having an interest in the issue and the Opposition, on the face of it, on any constitutional matter or matter of public interest would have a constitutional duty to protect the citizen," Samuels added.

According to Samuels, Matalon, who heads the PSOJ, indicated that the Coke extradition issue had caused strained relations between the United States and Jamaica.

"He has, therefore, placed an interest in the private sector in the resolution of the matter. So he may be pulled in under the umbrella of persons with a public interest," Samuels asserted.

Samuels concluded that he did not believe the naming of Simpson Miller and Matalon as defendants encroached on their constitutional rights to freedom of expression, adding that they now had an opportunity to air their views "in the right place".

Opposition Spokesman on Justice A.J. Nicholson said the Constitution could not give a right to a person, and when that right was exercised properly, the law sought to have that person put before the court.

"It is the very first time I have heard of anything like this," Nicholson said. "In all my years, this is something that is quite unknown. "It is against the principles and precepts of the Constitution."

The motion will be heard on May 5.