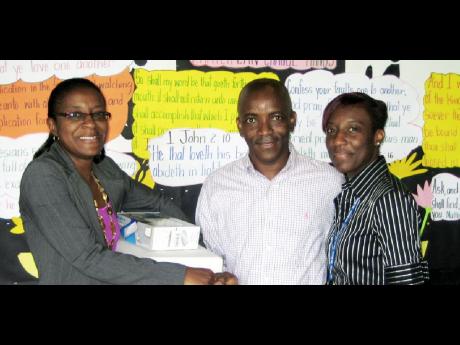 The Rotary Clubs of Jamaica will officially launch its Guinness World Record-breaking attempt this Saturday to collect more than 242,624 books in seven days.

The week launches on Saturday with a kids' day, and entertainment for children, including face painting, puppet shows, story time, yoga, among others.

As one of the main sponsors, Scotiabank has been busy rallying staff to collect books, and have committed volunteers to help with the counting each day. It will also organise a handover event next Tuesday at Emancipation Park to coincide with Read Across Jamaica Day.

The clock for the book drive stops at 9 a.m. Saturday, May 8.

A poultry project has been established at the Donnington Primary School in St Mary. It was officially launched on April 23.

The project, which began operations in November 2009, was funded by the Food and Agriculture Organisation of the United Nations, with support from the school and the Jamaica 4-H Clubs.

The project, which aims to encourage appreciation for locally produced food and develop entrepreneurial skills among students, is currently being operated by a group of seven students who are members of the Donnington Primary School 4-H Club.

The police have solved some 200 cases during the first week of operation of the Missing Persons Call Centre, according to Karl Angell, director of communications at the Jamaica Constabulary Force.

Angell said the successes resulted from the 581 missing-person cases reported to the centre since its launch on April 19.

The call centre is located at the Office of the Police Commissioner and is manned by six district constables.

The police spokesman said families and friends usually do not inform the police when persons reported missing return home.

"If you have filed a missing-persons report at any of the stations in any parish, and the persons who you reported missing have returned, it should be part of your responsibi-lity to tell the police," he implored.

The Trench Town Reading Centre has benefited from hundreds of thousand of dollars in grants from the United States Embassy's Public Affairs Section for construction and refurbishing projects.

The embassy has also funded summer programmes and coordinated a book drive. The American Friends of Jamaica and the embassy's Community Liaison Office have also provided physical and financial support.

Founded in 1993, the centre is a non-profit community library and education centre situated in the heart of inner-city Trench Town.