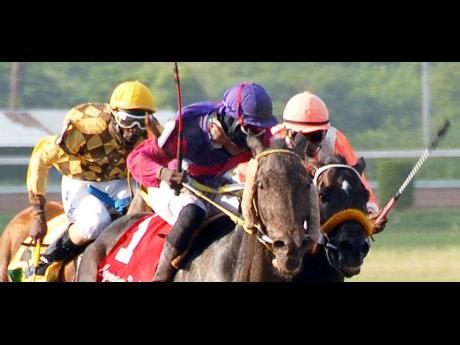 SAMBA DANCER (centre), running at odds of 10-1 with apprentice Robert Hallendeen aboard, gets the better of the favourite LATIN KING (right), with Omar Walker, and LA'S DANCER (Oneil Mullings) to win the CTL Claiming Series No.4 over 1400 metres at Caymanas Parl yesterday. - Colin Hamilton/Freelance Photographer

Super fit SAMBA DANCER upstaged the 3-5 favourite LATIN KING to win race No. 4 in the CTL Claiming Series ($250,000-$210,00) in decisive fashion at Caymanas Park yesterday, to complete a double for apprentice Robert Halledeen on the card.

Offering odds of 10-1 in a field of 10, SAMBA DANCER found himself outpaced towards the rear in the early stages as highly fancied LA'S DANCER (2-1) and LATIN KING, under champion jockey Omar Walker, duelled for the lead passing the half-mile, ahead of MISS TIMS and FRENCH ROGUE.

LATIN KING turned for home just ahead of pesky LA'S DANCER and FRENCH ROUGE (wide) on the outside, but in the end proved no match for SAMBA DANCER, the seven-year-old gelding storming through early in the last furlong to win by 1 3/4 lengths.

SAMBA DANCER, who was notching his second consecutive win for the third time from his last four starts. SAMBA DANCER is trained by Dennis Lee for his wife, Faye.

Hallendeen, whose progress in the saddle has been slow since he started riding last September, also won aboard 4-5 favourite RUNE in the fourth race to record the first double of his career.

The 22-year-old claiming apprentice said he elected to ride SAMBA DANCER from well off the pace and it paid dividends.

"The horse had two hard races recently and I decided to break well with him and drop my hands. Although he was well behind approaching the half-mile, I knew I had it won after turning for home within striking distance of the leaders," he said. "Right now I'm working hard and focused. This double will help my confidence and I'm happy."