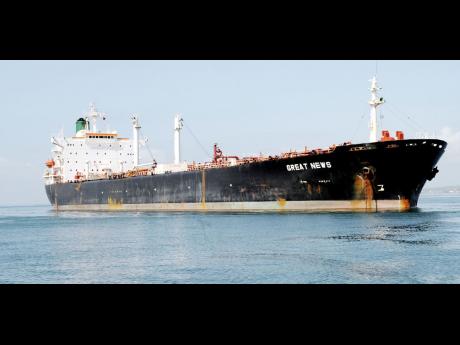 In this March 2009 Gleaner photo, a ship flying the Jamaican flag is docked offshore Petrojam in Kingston after sustaining damage when it hit the refinery's pier. Jamaica has struck a deal with Venezuela for it to acquire majority ownership of the refinery. - File Photo

A wall of silence has been thrown up around the takeover deal with PDV Caribe SA, in which Jamaica has agreed to give the energy company majority ownership of Petrojam Limited.

Jamaica has signed off on the transfer of a two per cent stake to PDV Caribe, an affiliate company to Petroleos de Venezuela SA (PDVSA), giving the Venezuelan energy company 51 per cent ownership of the Petrojam refinery, while Jamaica will retain a 49 per cent stake.

Prime Minister Bruce Golding disclosed the deal on April 20, but not its terms. He linked it to Petrojam's need for capital to complete the US$1.2-billion improvement project under way.

Refinery manager Winston Watson referred all queries to the Office of the Prime Minister for more details, while board members in state-owned energy companies said it's been agreed that only Golding or his energy minister James Robertson, would comment.

Robertson, too, is not saying much, but energy sources say that's because the deal is a central part of his upcoming parliamentary presentation in the Sectoral Debate, which begins next Tuesday.

The refinery upgrade needs at least another US$663 million of investment to finalise the job.

The FEED analysis that establishes the design and engineering parameters for the upgraded facility was completed last year, but the project has stalled since December because Jamaica had run out of cash.

In the past three years, Petrojam has spent J$4 billion on the project, but it will take another J$60 billion to finalise.

Finance ministry data indicate that no capital expenditure was budgeted by Petrojam for the project this fiscal year, but its 2010 report on Jamaica Public Bodies also disclosed that the PetroCaribe Development Fund (PDF) "would assist in financing" the refinery upgrade.

The fund, at March 2010, had amassed an estimated J$93 billion as part proceeds of converted oil payments owed to state-owned PDVSA by Petrojam, but made available to Jamaica in the form of a long-term cheap loan.

The Jamaica Public Bodies report did not disclose the level of assistance from PDF but it projects new long-term loan liabilities for Petrojam at $9.7 billion.

PDV Caribe first invested in Petrojam in 2006, acquiring a 49 per cent stake months after Venezuela and Jamaica signed off on the Venezuelan-backed PetroCaribe oil facility and a cooperation agreement for the improvement of the refinery in two phases.

The project will grow the plant's capacity from 36,000 barrels per day to 50,000 barrels; install a new catalytic reforming unit, a new desulphurisation facility to reduce the sulphur content in diesel oil from 5,000 parts per million to approximately 15ppm; a new vacuum tower with nominal capacity 30,000 daily barrels to produce vacuum gas oil for export; and a Delayed Coker Unit for the conversion of the vacuum residue into gasolene, jet fuel and diesel. The petcoke by-product, which costs much less than the price for fuels such as coal, will be sold locally as fuel for power generation.

The second part of the project will involve the installation of a 'bottoms upgrading scheme' to reduce the proportion of atmos-pheric bottoms in the refining process, using delayed coker technology.

Back in December when the final cost project was determined and work slowed on the refinery upgrade project, Deputy Prime Minister Dr Kenneth Baugh, who was in Copenhagen representing Jamaica at the United Nations Climate Conference, was instructed to, and met with, Venezuelan President Hugo Chavez to explain the situation.

Neither Watson, his bosses at the Petroleum Corporation of Jamaica, of which the refinery is a subsidiary, nor the Venezuelan Embassy were willing to explain what Jamaica got for the two per cent ownership transfer, and whether Venezuela would take over management of the operation.

The 47-year-old Petrojam refinery generates revenues of up to J$120 billion per year, but its profits tend to fluctuate because of changing oil prices and exposure to foreign-exchange risk.

In 2008/09, the refinery made net losses of J$4.7 billion, including a more than $3 billion of foreign-exchange losses; a year later, at March 2010, it reported an estimated surplus of J$4.6 billion, according to the Public Bodies report.