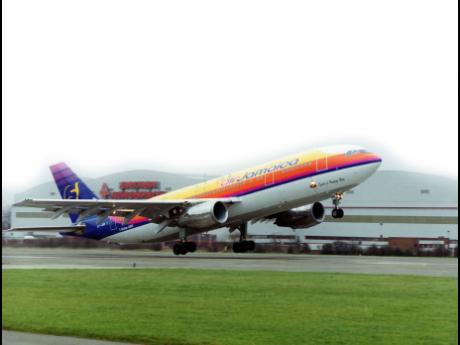 Effective midnight tonight, Air Jamaica will cease to be a Jamaican-owned entity, and the 'little piece of Jamaica that flies' will be operating under a transition agreement on behalf of the Trinidad-based Caribbean Air-lines Limited (CAL).

Commencing Saturday, May 1, CAL will take full financial responsibility for Air Jamaica. And in return for the transfer of Air Jamaica's routes and goodwill to CAL, the Government of Jamaica will receive a 16 per cent share-holding in Caribbean Airlines Limited which, according to Dennis Lalor, chairman of Air Jamaica, is valued at approxi-mately US$30 million.

At a press conference held on Wednesday at the Harbour Street headquarters of Air Jamaica, Bruce Nobles, chief executive of Air Jamaica, pointed out that the transition arrangement is a rather complex agreement that will involve the signing of five or six contracts - one will be between CAL and Air Jamaica Limited, and another between the Government of Jamaica and the government of Trinidad and Tobago.

With regard to the current staff of Air Jamaica, all their positions will be made redundant today. And over the past two to three days, approximately 1,000 of the 1,500 Air Jamaica workforce have been offered temporary contracts with CAL Air Jamaica Transition Limited, a wholly owned sub-sidiary of Caribbean Airlines that has been set up specifically to handle the transition operations.

The 'transition' operation will exist for a period of up to one year, while Caribbean Airlines finalises the creation of a Jamaican subsidiary and obtains the relevant access rights from the United States and Canadian authorities.

In the interim, both the US and Canadian transportation authorities have provided Air Jamaica with 60-day and 90-day waivers, respectively, which will allow Air Jamaica Limited to continue to operate under its existing air operator certificate and bilateral agreements.

Nobles reiterated that there will be a seamless operation come May 1, as the airline will operate under the Air Jamaica code and passengers will continue to make bookings through Air Jamaica's existing reservation system and will be issued the same tickets as previously.

And Ian Brunton, CEO of Caribbean Airlines, stated in response to specific questions re the temporary waivers from the US Department of Transportation and Canadian authorities that their understanding is that the govern-ment of Trinidad & Tobago is in active bilateral negotiations with the US government and this agreement could be finalised as early as the end of May, and this was not expected to be a problem.

Nobles added that it is their understanding that as long as substantial progress was being made in the 'open skies' bilateral talks between Trinidad and the US, the Air Jamaica waivers would remain in place.

Shafeek Sultan-Kahn, the CAL director who has been overseeing the transition arrangements, said that staff members will be offered contracts that range from three to six months in duration.

Some are fixed-term contracts, others are equipment specific, and some are renewable.

Checks by the Financial Gleaner with union representatives indicate that up to early Thursday, around 70 flight attendants had received six-month renewable contracts.

Jamaican Airline Pilots' Association (JALPA) officials indicated that they expect around 77 pilots - including members of the manage-ment teams - to receive offers.

The active membership of JALPA is approximately 110. According to the pilots contacted, the offers ranged from 30-40 per cent below their current packages.

One area of disquiet expressed by the unions was that up to press time, several union delegates for the ground operations, represented by the National Workers Union, and members of the JALPA team leading the Air Jamaica staff bid had not been offered employment contracts by CAL.

This matter was being monitored by the unions, which said they will be meeting with the CAL management team to address these and other pressing issues some time this morning.

The airline will also continue to offer twice-per-day intra-island flights between Kingston and Montego Bay, and these could possibly be increased to three times per day in the near future.

With regards to the fuel hedge agreement, Dennis Chung, project manager for the Air Jamaica divestment team, said as of May 1, Air Jamaica will cease to be eligible for preferential fuel-purchase arrangements under the PetroCaribe agreement between Venezuela and Jamaica, and that the airline would have to make "other arrangements".

Sources close to the negotiations have indicated to the Financial Gleaner that an important part of the CAL/Air Jamaica transition arrangements is that Air Jamaica will be offered the same 'fuel hedge' from the government of Trinidad and Tobago which CAL currently receives.

This would allow the airline to purchase fuel at US$50 per barrel and it is estimated that this should provide savings during the transition year of around US$14 million.

This is critical if the airline is to come close to a break-even position in Year One. As it currently stands, the management teams is trying to trim a further US$4 million to US$5 million in projected over-heads in order to break even.

So the Lovebird continues to fly for a few more months. Thanks for the memories, smooth landings, and national pride. Walk good, Air Jamaica. -