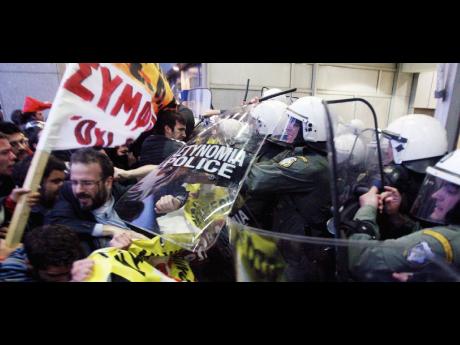 Riot police clash with protesters during a rally outside the finance ministry in central Athens Thursday. Greece is poised to impose sweeping new austerity cuts amid negotiations with the International Monetary Fund and European Union for a financial rescue package. - AP

Papandreou hinted strongly at the need to take broader new austerity measures, as bailout negotiations with the European Union (EU) and the International Monetary Fund appeared to be drawing to a close.

"We must take historical decisions, however difficult and painful they are," Papandreou said after meeting with union leaders. "No one must have any doubt that we will do whatever it takes to save the country. ... We will not run from the fight."

Unions reacted angrily after the meeting. They have already planned large weekend protests for Labor Day on May 1 and a general strike on May 5.

"We got a flavour of a very harsh package of measures," said Yiannis Panagopoulos, head of the powerful GSEE umbrella trade union. "Measures that will lead to recession."

Late Thursday, riot police fired tear gas and clashed with protesters outside parliament and the finance ministry. The clashes were not extensive and no arrests were reported.

Athens is currently in talks about the rescue package, worth €45 billion (US$60 billion) this year, and more in the following two years, to cope with its acute financing crisis that has brought it to the brink of default.

Greek officials say the talks are likely to be concluded by the end of the week.

The prospect of a deal eased massive pressure on Greece in the bond markets and saw shares on the Athens Stock Exchange rebound strongly after days of heavy losses.

The bourse's General Index shot up to close 7.14 per cent higher at 1,829.29 points, while the spread on Greek 10-year bonds dipped to 6.48 percentage points over their benchmark German equivalent, from 10 points Wednesday.

But in statement late Thursday, Moody's warned a "multi-notch downgrade" remains likely. It said it will wait to see details of the rescue package before a possible revision of Greece's credit rating.

As Greece eagerly sought quick spending cuts, the government promised a "colossal" reduction in military operating costs to speed up plans to modernise the armed forces.

Defence Minister Evangelos Venizelos said Greece is aiming to slash operating costs by up to 25 per cent in 2010 from 2009, instead of the planned reduction of 12.6 per cent listed in this year's budget, but would leave arms procurement programmes unaffected.

He said Greece has planned to spend about €6 billion - or 4.8 per cent of gross domestic product - on defence this year, with about €2.3 billion going on arms spending as measured by EU accounting rules, and the rest used for paying personnel and operating costs.