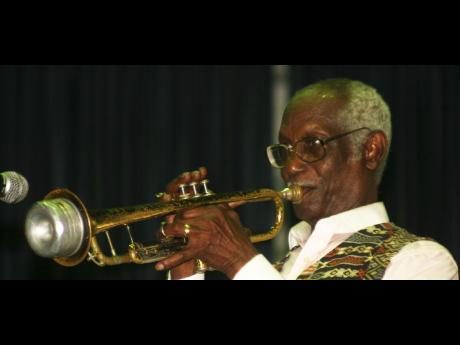 The Jamaica Ocho Rios International Jazz Festival 2010 was launched on Wednesday evening at the Four Seasons Hotel, New Kingston, as a birth, a death, an anniversary and a celebration of the cycle of life.

Jazz Week is June 12-20, starting with a Jazz, Wine and Fashion event at the French Ambassador's residence and closing with Father's Day Jazz at Turtle River Park, Ocho Rios, St Ann, where Kingsley Ettienne, Pamela Williams, Tony Greene, Fab Five and Marie Claire will be among the performers.

The birth celebrated is that of the Sonny Bradshaw Foundation, which will support the training of young musicians. That, of course, comes from the death of Bradshaw before the 20th anniversary of the festival he founded. And the festival is as much about the cycle of Bradshaw's life and the festival's landmark year, as it is about the music.

Head of the Jamaica Music Museum, Herbie Miller, pointed out another cycle. He said that though some might find his endorsement of a jazz festival incongruous, he is in charge of a music museum, not a reggae museum. And jazz preceded Jamaica's popular music forms and is, in fact, the forefather of Jamaica's first real international music, following mento and ska.

Miller also pointed out that Bradshaw's embrace of various music forms "made him perhaps our most diverse musician". But, beyond being a musician, Bradshaw was a composer, theatre music arranger, union boss, festival director and critic, among other interests and pursuits.

Bradshaw's widow, Myrna Hague, expressed her happiness about the upcoming festival and the foundation's launch.

"I am so happy that his work will not die with him," she said. "And young people coming up behind him will have the benefit of what he achieved. That is what he would have wanted."

While the Jamaica Ocho Rios International Jazz Festival 2010 will be the foundation's first fund-raiser, Hague pointed out that she will supplement that effort with fund-raising in the UK in the summer and in the US later in the year. She said that there is a large Jamaican community in the latter which knew and remembered Bradshaw, plus "he and I have been performing together in the UK in the summer for the past 20 years". Then there are those who remember Bradshaw from the 1940s and '50s.

"He meant something to them, not just as a musician but a person," Hague said confidently.